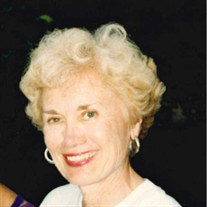 Knoxville - Aggie Bell (Agnes Slaughter Bell) passed away May 4, 2021 after complications from cancer. Born August 23rd, 1932 in Edinburg Texas to Mae Belle and Bush Slaughter, she moved to Knoxville after graduating from SW Texas State. She earned a Master's degree from the University of Tennessee. She married Thomas Rowe Bell Sr. (deceased 2015) in 1956 and enjoyed 59 years with him, raising four children and traveling the world. In addition, she devoted her time to the Knoxville community as a long time member of 2nd Presbyterian Church (since 1958), and as a member of numerous boards including the Helen Ross McNabb Foundation and the Ijams Nature Center. She was also a dedicated volunteer for Mobile Meals, the Zoo Knoxville, University Of Tennessee Medical Center and Adult Literacy. She leaves behind an enormous group of devoted friends, and neighbors who have supported each other for over 60 years. She is survived by four children--Bush A. Bell, Thomas R. Bell Jr., Mary Bell Boltwood and David L. Bell; 13 grandchildren--Patrick Bell, Katie Bell, Tommy Bell (and partner Sarah Hitzel), Sam Bell (and spouse Carly), Margaret Bell, Rowe Bell, Leo Bell, William Bell, Harrison Bell, Maggie Bell, Ava Boltwood, Rives Boltwood, Lanson Boltwood; two great-grandchildren--Harrison and Houston Bell; three daughters-in-law Jamie Kane, Katie Bell, Preciosa Bell, and son-in-law Scott Boltwood. Aggie and the family would like to thank her caregivers Christina, Gaynell, and Linda for their compassionate care during this time of need. In lieu of flowers, the family requests memorial gifts to Mobile Meals of Knoxville and Second Presbyterian Church. A memorial service will be held at Second Presbyterian Church at 11:00 AM on Monday, June 7th. The family will receive guests following the service at the church. Arrangements by Rose Funeral and Cremation - Mann. Online condolences may be made at www.rosefuneraltn.com.

Knoxville - Aggie Bell (Agnes Slaughter Bell) passed away May 4, 2021 after complications from cancer. Born August 23rd, 1932 in Edinburg Texas to Mae Belle and Bush Slaughter, she moved to Knoxville after graduating from SW Texas State. She... View Obituary & Service Information

Send flowers to the Bell family.