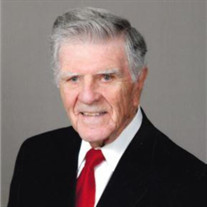 Allen, 92, passed away peacefully on Tuesday, March 2nd. He was born April 13, 1928 to parents Elizabeth Beck Ware and Allen J. Ware, Sr. He was a 1946 graduate of Knoxville High School where he met his future wife, Wyndham (Wynn) Parkey whom he married on December 20, 1951. When he graduated from the University of Tennessee, he also received a 2nd Lieutenant commission and he was soon deployed to Korea where he spent 16 months on active duty. After he was honorably discharged as a Captain, he returned to the University where he earned a law degree. While at UT, he was a member of Phi Gamma Delta and Phi Delta Phi legal fraternity. He practiced law over 50 years, first as a partner in the law firm of Ayres, Parkey, Skaggs and Ware and then for many years in a solo practice, specializing in Real Estate law. Early in his career he was the assistant county solicitor for a number of years. He was a member of both the Knoxville and Tennessee Bar Associations. He enjoyed learning and he went back to UT many times to take courses even after he was well up in years. He enjoyed golf, playing the guitar, reading, exercising, growing vegetables and roses and building circus model trains. He was a member of Circus Model Builders and the Circus Historical Society. And while he absolutely hated chicken, he had a love affair with sweet iced tea. Earlier in life he enjoyed glider flying and snow skiing. Always fascinated with tractor trailers, at one stage in his life he purchased trailers to rent and he enjoyed driving a tractor to distant places to pick up a trailer and driving the 18 wheeler home. During that time he belonged to Knoxville Motor Transport Association. He was a former member of South Knoxville Optimist Club, West Knoxville Kiwanis Club where he served as president, and Sons of the Revolution. He volunteered as a Little League baseball coach, an intramural basketball coach, Boy Scout leader, Big Brother in Kids Hope USA and he delivered Mobile Meals. He was a 30 year member of the Appalachian Reading Group and a member of a couples bridge club. His love for the Lord was exemplified in his life by his daily devotions, his Bible study and his willing availability to help those in need. He was a member of First Baptist Church, where, after learning sign language, he taught Sunday school to deaf children for many years. He was handsome, confident, had an infectious smile and a wonderful sense of humor. He was an amazing husband, father, grandfather, brother and friend who will always be remembered as a really good man who never took himself too seriously and enjoyed life to the fullest. He was predeceased by his parents. Left to mourn his passing but to forever cherish his memory are his beloved family members, his wife of 69 years and his son Wayne both of Knoxville, his daughter Angie (Art) Beattie of Atlanta, his granddaughters Jenna (Mark) Lovoy of Birmingham and Jessica and Julie Beattie of Atlanta and his great grandchildren AJ and Savannah Lovoy. He also leaves his sister, Ann Ware Kavanaugh and nephew Eric Ironside both of Daphne, Alabama and his niece Wendy (Jeff) Poulsen of Knoxville, several cousins, his Siamese cat Sammy and many good friends. The family wishes to extend appreciation for the love and compassion of his caregivers Joe Stuart, Louise Howard, Marie Howard and Renea Jolly who enabled him to remain at home and to Avalon Hospice in his final weeks. The family would appreciate any memorial contributions to be made in his name to his favorite charity, Every Home for Christ, P.O. Box 64000 Colorado Springs, CO 80962. Although the University of Tennessee has lost a fan, heaven has gained a truly remarkable man. Services were private. Arrangements by Rose Funeral and Cremation-Mann. Online condolences may be made at www.rosemortuary.com.

Allen, 92, passed away peacefully on Tuesday, March 2nd. He was born April 13, 1928 to parents Elizabeth Beck Ware and Allen J. Ware, Sr. He was a 1946 graduate of Knoxville High School where he met his future wife, Wyndham (Wynn) Parkey whom... View Obituary & Service Information

Send flowers to the Ware, family.