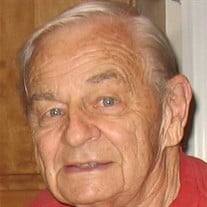 Anthony “Tony” Rakowski, 90, passed away at his Knoxville, TN home on January 10, 2021. He was born to Anton and Ellen (Roach) Rakowski on September 13, 1930 in Chicago, IL, where his family was a pillar of the Polish community and dairy industry. One uncle produced cheese, another cream, and his father milk. Tony’s first job was in the family business as a milkman. He graduated from St. Philip High School. A man of abiding faith, Tony entered the seminary, but he always preferred things he could fix with his hands and soon left to pursue his calling as a repairman. He first went to Zenith Radio in Chicago where he met his beloved wife of 64 years, Eleanor Madsen. During the Korean War, Tony proudly offered his skills in service of his country as a U.S. Air Force medic in Japan. After the war, Tony and Eleanor married and he settled into a job at Illinois Bell from which he would retire 30 years later as a manager and member of the Telephone Pioneers. Although he never stopped fixing things, retirement allowed Tony to travel, fish, and join numerous bowling leagues in Knoxville, where he moved to be near family. He was also an avid reader and weekly visitor to his local library. He loved sitting on his porch with a good book and a crossword puzzle. He is survived by his wife Eleanor, his daughter Susan (John) Haydek of Knoxville, his son Paul (Mary) Rakowski of Downers Grove, IL, and his four grandchildren of which he was so proud: John (Caitlin) Haydek of Denver, CO; Peter (Amanda) Rakowski of Lorton, VA; Chris (Nicole) Haydek of Denver, CO; and Jennifer (fiancé Aaron Roper) Haydek of Washington, DC and his sister Patricia (Robert) Serritella of Mt. Prospect, IL. In addition to his parents, he is predeceased by his sisters Catherine Ward, Nancy Bowman, and Ellen Tausk, and his brother Thomas Rakowski. Tony’s family is deeply grateful to his wonderful medical team—Drs. Rose, Grapski, Ibach, and Kirby—who kept him in high spirits and at home to the end. A memorial service will be held at a later date. Online condolences may be extended at www.rosemortuary.com. Arrangements made by Rose Mortuary Mann Chapel.

The family of Anthony Rakowski created this Life Tributes page to make it easy to share your memories.

Anthony “Tony” Rakowski, 90, passed away at his Knoxville, TN...

Send flowers to the Rakowski family.