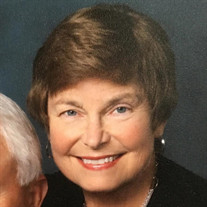 Barbara Jean Henwood Bolen, 73, passed away, due to complications of dementia, on Tuesday, November 2, 2021. Barbara was born in Long Island, New York on July 12, 1948 and grew up in Ho-Ho-Kus, New Jersey with her two (2) brothers, Barton and Greg. She graduated from North Brook High School and attended Perdue University. Barbara spent summers with her family in Plantation, FL where she would eventually meet her husband of 52 years, Donald (Don) Bolen. They married in 1969 and would welcome their first and only child, Steven, a year later. They briefly moved to Jackson, TN, Don’s hometown, and then settled in Knoxville, where she attended the University of Tennessee and earned her nursing degree. They became members of Central Baptist Church and Holston Hills Golf & Country Club where they made life-long friends. Barbara was a devoted Christian with a servant’s heart, which was evident in the fact that she spent her career caring for others as a Registered Nurse at Fort Sanders Medical Center and later Baptist Hospital. She specialized as an oncology nurse which was a blessing when she received her own breast cancer diagnosis. As a cancer survivor, she became a supporter of the Susan B. Komen Race for a Cure. She was also very involved in supporting Serenity in the Smokies, a retreat for women working a 12 step program. She had an adventurous soul and was an avid hiker, biker and traveler. She and Don loved visiting all of the National Parks with Glacier National being one of her favorites along with the Great Smoky Mountains. She shared her love of the outdoors with all that she met and found a group of like- minded ladies. They called themselves the “Sole Mates” and hiked all throughout the Smoky Mountains. As Barbara enjoyed being active, vacations always involved more than rest and relaxation. She and Don took the most amazing biking trips across Italy, Hawaii and Alaska. Her greatest love of all was her family. She loved fiercely and adored her son and two granddaughters. They were the light of her life and the Knoxville Zoo was always a favorite spot when they visited. Barbara’s smile and laughter will be missed but every time we see fireflies or take a walk in the woods we will think of her and know she’s walking with us. Barbara is preceded in death by her parents and is survived by her husband Don and son Steven (Jodi), two granddaughters Lydia Ruth and Hazel Ann of Chattanooga, TN as well as her two younger brothers Barton Henwood (Donna) of Lancaster, CA and Greg Henwood (Martha) of Crystal River, Florida; niece and nephew Jennifer Kenngott (Curtis) and Corey Henwood (Rebekah) and several great nieces and nephews. Services will be held at Rose-Mann Heritage Chapel in Knoxville, TN. The family will receive friends Saturday, November 6, 2021 from 2:00 – 3:00pm with the funeral service at 3:00pm. In lieu of flowers, donations can be made to the Alzheimer’s Association (act.alz.org) or Friends of the Smokies (friendsofthesmokies.org). Arrangements by Rose Funeral and Cremation – Mann. Online condolences may be made at rosefuneraltn.com.

Barbara Jean Henwood Bolen, 73, passed away, due to complications of dementia, on Tuesday, November 2, 2021. Barbara was born in Long Island, New York on July 12, 1948 and grew up in Ho-Ho-Kus, New Jersey with her two (2) brothers, Barton and... View Obituary & Service Information

Barbara Jean Henwood Bolen, 73, passed away, due to complications...

Send flowers to the Bolen family.