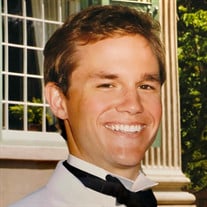 Benjamin Tate Goodson, beloved son, brother, uncle, and friend, passed away on October 27, 2021. He was born in Knoxville on July 5, 1989. Ben notched many accomplishments during his life. He was a proud graduate of the Webb School of Knoxville; the College of Charleston, where he received a B.S. in economics and a minor in philosophy; and Vanderbilt University, where he received a M.S. in Finance. After working for J.P. Morgan in New York, Ben returned to Knoxville to join Proffitt & Goodson, where he was an investment advisor and one of the principals of the firm. Ben’s expertise earned him the respect of clients and colleagues and contributed significantly to the continued growth and success of the firm. Ben’s generous and charitable nature showed in many ways. He served as the president of the Optimist Club of Knoxville and for many years served on the committee for the Russell Biven Clayfest Tournament supporting the Helen Ross McNabb Center. He volunteered as a tutor to read with primary school students at Green Magnet Academy and helped with the First Tee program at Williams Creek golf course. He contributed generously to non-profit organizations and devoted countless hours of volunteer work to aid their missions. Ben had many other passions. He loved golf at Holston Hills Country Club and treasured his time on family golf trips to Scotland and Ireland. In recent years, he traveled throughout Europe, to India, Iceland, and Hong Kong, and he kept a lengthy list of future destinations for travel. In the winter, he turned to snowboarding in Colorado. The extended family’s annual trip to Pawleys Island in South Carolina marked the highlight of every summer for Ben. An avid reader, he was partial to spy thrillers, science fiction, philosophy, and business books. He also assembled a growing collection of antiquarian books, photographs and maps covering Knoxville and East Tennessee. Ben hiked and fished in the Great Smoky Mountains. Ben loved animals, especially his cat, Tom (aka “Tom-Claude Van Damme”), and his dog, Enzo. Ben enjoyed a wide swath of friends. His engaging smile, generous spirit, perspicacious nature, and optimistic outlook drew people of all ages and all walks of life into his circle. Family was paramount to Ben. He devoted time every week to being with his parents, whether playing golf, running, mountain biking, playing Scrabble or watching the latest rounds of Jeopardy. He was particularly close to his brother Neil Goodson, with whom he also worked at Proffitt & Goodson, and Neil’s wife Elisabeth. His nieces, Ella and Amelia Goodson, melted his heart. Ben was preceded in death by his grandparents, Paul and Willie Ruth Goodson and Bill and Rosemary Creech, and his uncle Steve Goodson. Ben is survived by his parents, David N. and Nancy C. Goodson, his brother Neil W. Goodson (Elisabeth), nieces Ella and Amelia Goodson, aunts Mary Will Jones (Lee), Donna Creech and Sharon Goodson, and his cousin Christian Tate Goodson. A service honoring Ben’s life will be held at Church Street United Methodist Church (900 Henley Street, Knoxville) on Friday, November 12, 2021, at 11:00am. Masks are encouraged. In place of flowers, memorial gifts can be made to the Helen Ross McNabb Foundation ChildNet Fund at 200 Tech Center Drive, Knoxville, TN 37912 (https://mcnabbfoundation.org/helping-the-center/childnet-east-tennessee/), or a charity of your choice. Arrangements by Rose Funeral and Cremation – Mann. Online condolences may be made at rosefuneraltn.com.

Benjamin Tate Goodson, beloved son, brother, uncle, and friend, passed away on October 27, 2021. He was born in Knoxville on July 5, 1989. Ben notched many accomplishments during his life. He was a proud graduate of the Webb School of Knoxville;... View Obituary & Service Information

Send flowers to the Goodson family.