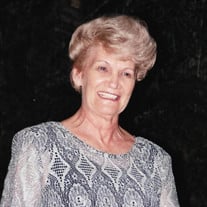 Betty Ingram Templeton, 83, of Powell, TN (formally of Rose Hill, VA), passed away on January 28th, 2022 after a brave battle with Alzheimer’s. Betty was born on April, 25th 1938 to Roy & Alma Hobbs in Rose Hill, VA. Betty went on to graduate from Thomas Walker High school in 1956 as an honor student. After graduating from high school, Betty went on to pursue a degree in life. Later in 1956, she met Joe Earl Ingram, an Army Veteran and Iron Worker, and they had their first son together, Michael. She also loved and cared for her stepson Randy. and 16 years later they had another son Mark. Betty and Earl moved all around the country, from Detroit, MI, Houston, TX, Washington, D.C., to Dallas TX, and Cincinnati, OH. She was a computer punch card programer in the 1960’s and 1970’s for several high profile companies such as the Esso Corporation (later renamed Exxon), Ma Bell (later AT&T), and The Government Employees Insurance Company (later GEICO). She later worked for Belk Simpson, for 10 years, and retired from the workforce at DeRoyal Industries/3D, in Rose Hill. VA. Later in life, after Earl had passed, she met a grateful, loving, funny man by the name of Donald Templeton, from Kingsport, TN. They dated a couple of years and were married in 2000. They had 20 adventure filled years together, driving all over the southeast United States and seeing as much as they could. They went to family weddings and reunions, plus got to welcome new family members to the world. Betty loved her boys and was a dedicated mom to all of her children, and later on grandchildren. Family was very important and she loved when family came in to visit. Betty instilled her values in all those around her. The hole left by her absence is simply impossible to fill. Betty was passionate about cooking, and when she wasn’t filling her home with warmth, kindness,and laughter, she could be found in her kitchen cooking all kinds of scrumptious food and the best desserts around! Betty was preceded in death by her parents, Roy & Alma Hobbs, siblings Jewel Ingram & (Palmer), Jimmy Hobbs & (Shirley), Shirley Malone & (Steve), Judy McKeen & (Robert), her husband of 35 years Joe Earl Ingram, her stepson Randy Ingram, and her second husband of 20 years, Donald W. Templeton. She is survived by her sister Earlene Flood, sons Michael L. Hobbs & (Roxie), Mark E Ingram & (Lynda), grandson Michael J. Hobbs & (Corina), and granddaughters Amanda Hobbs, and Emelia Ingram. Great Grandchildren, David, Colt, & Jeremy. The family requests that in lieu of flowers, donations for Mortuary services be sent to Rose Funeral & Cremation - Mann 6200 Kingston Pike, Knoxville, TN 37919. There will not be a funeral service/memorial/ or a celebration of life, because Betty did not want any, and we are adhering to her wishes.

Send flowers to the Templeton family.