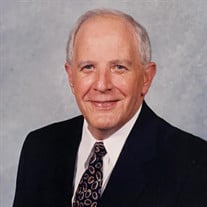 Bill Fox, age 82, of Knoxville TN (formerly LaFollette TN) passed away December 1, 2021 at UT Medical Center. Bill was a dedicated family man who doted on his grandsons and worked hard to ensure his family had a wonderful life. Bill didn’t save his generosity for family alone. He was always willing to quietly help anyone in need. His desire to help people meshed perfectly with his chosen career of 34 years as a State Farm Agent. Often he could be found heading to the scene of an accident to help his insureds make it through a tough situation. Bill began his working life while still attending LaFollette High School as an on-air personality and a play-by-play announcer at WLAF radio. Upon graduation from Cumberland College he returned to his alma mater as a teacher and a coach before beginning his insurance career. In his retirement years, Bill could often be found enjoying life on the shore of Norris Lake. Bill was a member of Central Baptist Church of Bearden where he served the role of Deacon, Sunday School Teacher, Committee Member and Chairman, and R.A. Coach. He was a member of the Chuck Chance Sunday School Class.. Bill was preceded in death by his parents, Glinn and Bernice Lester Fox; sister Mattie Collene Carter; brothers-in-law Ray Clark, Jack Carter, and Buddy Claiborne. Survived by his loving wife of 60 years, Suzanne Claiborne Fox; son and daughter-in-law, Bryan and Cindy Fox; daughter and son-in-law, Stephanie and Rusty Bingham; grandsons, Andrew and Kelsie Bingham, Nathan Bingham and Will Fox; sister, Dr. Joan Clark;. nieces, Kara Whitley, Amy Carter, Angie Estes, and Judith Pelot, along with several great nieces and nephews, many cousins and friends. Memorials may be made to the Central Baptist Church of Bearden Children’s Ministry, 6300 Deane Hill Drive, Knoxville TN 37919 or LaFollette First Baptist Church Lottie Moon Mission Offering, 255 W. Central Ave. LaFollette TN 37766 or charity of your choice. Honoring his wishes, a private memorial service was held with Family. Condolences may be shared with the family online at www.RoseFuneralTN.com.

Send flowers to the Fox family.