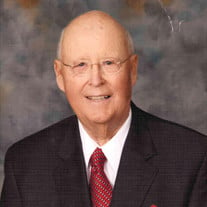 Billy Nash Wood Wallace, who died on September 7, 2021, was born on September 29, 1923, in Knoxville, Tennessee, to Myrtle Ogg Wood and Theodore Wood. He was later adopted and raised by Bertha Ogg Wallace and Rex Wallace. He is predeceased by his wife of 62 years, Ethelynne Haynes Wallace, and his son-in-law James Lee Johnson. He is survived by his daughters Beth Wallace Bales (Howard) and Lorri Wallace Barnhill (Gordon), his grandsons Paul Wallace Johnson (Lacey) and James Lucas Johnson, his great-granddaughter Audriana Estella Johnson, and his cousin Mary Costa. He attended Central High School, graduating in 1941, and was honored to be selected for the Central High School Wall of Fame for his lifelong service in the ministry. He attended both the University of Tennessee and the University of Louisville, receiving a Bachelor of Arts from the latter. He received the Master of Divinity from Southern Seminary in Louisville, and was awarded a Masters in Educational Administration and Supervision from the University of Tennessee. He ministered in churches in Lusby Mills, Kentucky, Toccoa, Georgia, Chattanooga, Tennessee, and Knoxville, Tennessee. He was instrumental in the creation and development of the church camp of First Baptist Church of Chattanooga, Dogwood Lodge, and served as camp director for many years. In 1969 he began his twenty-year career with the University of Tennessee in the Continuing Education Department. During that tenure, he was responsible for the creation and operation of the non-engineering Co-op Education program for the UT System. After retiring from the University of Tennessee, he served as the Director for the Knoxville FISH program for twelve years, an ecumenical organization providing food to the needy. He viewed his entire life as an opportunity for ministry, whether as an adult son, a father, a grandfather, a church employee, university employee, or retiree. He mentored many young people throughout his life and continued his Christian witness in every situation that presented itself. At the time of his death, he was an active member of First Baptist Church of Knoxville, the church where he was baptized as a young boy. His memorial service will be held at First Baptist Church of Knoxville on Sunday, September 12, 2021, at 3:00 p.m., with the Reverend Pam Neal and Dr. Barry Wood presiding. The family will receive friends beginning at 2:00 p.m. at the church. Family and friends will meet at Greenwood Cemetery at 10:45 a.m. on Monday, September 13, 2021, for an 11:00 a.m. Burial. In lieu of flowers, memorial contributions may be made to the First Baptist Church Helen Cox Music Scholarship, the First Baptist Church Golden Notes, or the Young Williams Animal Center of Knoxville.

Billy Nash Wood Wallace, who died on September 7, 2021, was born on September 29, 1923, in Knoxville, Tennessee, to Myrtle Ogg Wood and Theodore Wood. He was later adopted and raised by Bertha Ogg Wallace and Rex Wallace. He is predeceased... View Obituary & Service Information

The family of Billy Nash Wood Wallace created this Life Tributes page to make it easy to share your memories.

Send flowers to the Wallace family.