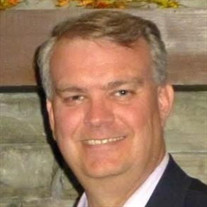 Bradley Michael Roquemore, age 51, of Knoxville, Tennessee, passed away peacefully at home on April 6, 2021 of natural causes. Born on March 19, 1970, he was the son of the late Ludie Louise (Penny) Roquemore and is survived by his father, Johnny Wayne Roquemore and stepmother, Allison, of Winston Salem, NC, and brother, Jeffrey, his wife Julie and daughter Jillian of Brentwood, TN. He is also survived by several aunts, uncles and cousins. Brad was born at Eglin Air Force Base, FL and grew up in Winston-Salem, NC. He was an Eagle Scout, member of Knollwood Baptist Church and active in youth groups and Young Life. Brad graduated from Mount Tabor High School where he participated in student government, sports, and loved acting in school plays. Brad spent a year in Australia during high school as a Rotary International exchange student. Brad was a lifelong learner with a warm, caring and unapologetic spirit of independence. He attended North Carolina State University where he was a member of Lambda Chi Alpha fraternity. Brad served in the Navy and was discharged honorably. Upon return from service, he continued his education at Guilford College in Greensboro, NC where he was a Phi Beta Kappa honors graduate with a B.S. in Business Management. He earned an MBA degree with honors from the University of Tennessee in 2002. Brad began his professional career as a federal lending compliance consultant, providing independent audits of major national mortgage lenders. He then became a real estate project and facility manager with Lawler-Wood, LLC, and earned his Project Management Professional certification. He played key roles in developing and managing large facilities at National Nuclear Security Administration sites in Oak Ridge, TN and Amarillo, TX. Brad enjoyed watching movies, traveling, and sought the out the finest restaurants for very well-done steaks, buttermilk biscuits, and lemon pound cake. As his family’s “project manager,” Brad always provided rich, detailed opinions on home improvements. Occasionally, they were even solicited. Brad deftly avoided exertion, but never tired at laughing when his father and brother attempted those tasks with varying degrees of success. Brad had a magnanimous side and, once a year, shared his treasured Scotch with Wayne and Jeff (if they were lucky). He was an adoring, fun-loving uncle to his only niece, Jillian, with whom he shared a quick wit and love of utterly ridiculous facts. Brad is being remembered by his friends for his love, kindness, caring and generosity. His family hopes to continue this legacy in honor of his memory. In lieu of flowers, the family asks that memorials be made to Guilford College, a place he loved and credits for unlocking his quest for learning, or to a charity of the donor’s choice. A family celebration of Brad’s life will be held at a later date. Arrangements by Rose Funeral and Cremation - Mann. Online condolences may be made at www.rosefuneraltn.com.

Bradley Michael Roquemore, age 51, of Knoxville, Tennessee, passed away peacefully at home on April 6, 2021 of natural causes. Born on March 19, 1970, he was the son of the late Ludie Louise (Penny) Roquemore and is survived by his father,... View Obituary & Service Information

Send flowers to the Roquemore family.