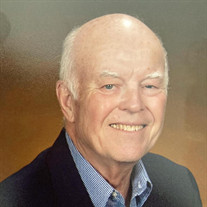 Not sure what to send?

Byron Lionel Kohlbusch, age 89 of Knoxville, TN was called home to be with his Lord and Savior Tuesday, May 3, 2022. He was born June 22, 1932, in Jefferson City, MO., only child to the late Ben and Lizzie Kohlbusch. He graduated from Hermann High School, Hermann, MO., where, at 15 years old, he began dating the love of his life, Betty Lou Schwentker, and they were married after his graduation from Carlton College in 1954. His career with the Travelers Insurance Co. was interrupted by a 2-year stint in the US Navy being stationed in San Diego, CA. After resuming his career with the Travelers, Byron, Betty and their 2 young sons made their home in St. Louis, MO. Upon becoming Group department Manager in 1967, Byron and family moved to Knoxville where Byron was very involved in his boys’ lives and in the community. Byron coached years of Little League and Sandy Koufax baseball, served as West Side YMCA Chairman of the Board and President of Farragut Cedar Bluff Little League. Taking early retirement Byron continued to volunteer his time serving others. He did after school tutoring at Urban Community Vision in Mechanicsville, and served many meals at the Love Kitchen. Countless hours were spent taking care of his beloved grandchildren and in fellowship with dear members of his Speak Out Sunday school class at Cedar Springs Presbyterian Church where he was a long time member. Far more than what Byron did in his 89 years, it was who he was that we will remember and miss the most. Byron loved and enjoyed people. His gift of conversation, along with a genuine interest in and care for others made him friends wherever he went. Whether it was at a restaurant or in the ER, the server and nurse were far more important than the food he had to order or his personal health emergency that needed to be tended to. Even in his later years, regardless of how poorly he felt, every stranger who crossed his path was someone to give a cheerful word and a funny quip, and to find out where they were from. As for Byron and the true friends in his life (and they were many), they loved each other well. This was best evidenced by life stories being exchanged (and possibly embellished), world history, politics, and sports being discussed, and articulate, witty, back and forth barbs being bantered. And if it was all shared over a beer and wienerschnitzel with a polka band playing nearby, a better evening couldn’t be spent. Unless that is, it was with his family. Byron treasured them all and they all treasured him. Whether he was quizzing those who called him Papa about capital cities of obscure countries, cheering them on at their thousandth game, meet, or match, or suddenly breaking out in a serenade of “Beautiful, Beautiful Brown Eyes,” they knew they were loved. And Byron loved nothing more than spending time with them all, talking, playing, laughing, and singing. Without words, Byron taught us to be content. That life’s wealth comes from relationships, not things, and that any monetary wealth one may have is to be generously shared with others. And he taught us to be thankful. Even when your body is in decline, your spirit and sense of humor don’t have to be. God is still good, just as he always has been. Faith, family, and friends were the priority of his life and is the legacy he leaves with us. Along with the wisdom to never, ever invade Russia in the winter. See Papa? We were listening! Byron is survived by his wife of 68 years, Betty Kohlbusch; sons Todd Kohlbusch (Carol Kohlbusch) and Jay Kohlbusch (Susan Kohlbusch); grandchildren Ben Kohlbusch (Staci Kohlbusch), Tyler Kohlbusch (Allie Kohlbusch), Kelly Huddleston (Andy Huddleston), Maggie Kohlbusch, and Halle Kohlbusch; and 9 great grandchildren. You are invited to a Celebration of Life in the Chapel at Cedar Springs Presbyterian Church, 9132 Kingston Pike, Knoxville, TN 37923, on May 21. Receiving of Friends – 1:00PM, Memorial Service – 2:00 PM. In lieu of flowers, donation may be made to Cedar Springs Presbyterian Church, designated for local missions. Online condolences may be made at www.rosefuneraltn.com

Byron Lionel Kohlbusch, age 89 of Knoxville, TN was called home to be with his Lord and Savior Tuesday, May 3, 2022. He was born June 22, 1932, in Jefferson City, MO., only child to the late Ben and Lizzie Kohlbusch. He graduated from Hermann... View Obituary & Service Information

The family of Byron Lionel Kohlbusch created this Life Tributes page to make it easy to share your memories.