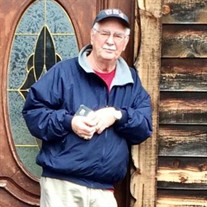 Carl Aubrey DeMarcus, 79, of Knoxville, passed away on January 11th, 2021 in Knoxville, Tennessee. He was born on December 7, 1941 in Knoxville, Tennessee to John Aubrey DeMarcus and Lucille Curtis DeMarcus. He graduated from Holston Hills High School in 1960. He began his career in the United States Airforce serving on military bases around the world. He earned many merits, certifications, and accolades during his time served until he retired with an honorable discharge in 1981. He was employed with the Knox County Sherriff’s Office as a Warrants Officer until 2014. Carl enjoyed many passions throughout his lifetime. He was an avid archer earning many awards for his expertise and was a member of the Smoky Mountain Archery Club. He enjoyed going to the gun range to refine his skills as a marksman. He loved photographing outdoor scenery, wildlife, and the people he loved. He most enjoyed the Annual DeMarcus Family Reunion. This is where he connected with family from around the country. This group of people brought him so much joy and laughter. Carl will be missed by many for his unique sense of humor and his fun and outgoing demeanor. Carl was preceded in death by his parents, John Aubrey DeMarcus and Lucille E. Curtis DeMarcus; sister, Jewel A. DeMarcus Roberts; nieces, Kathy Roberts Evans and Becky Roberts Suber. Carl is survived by his son Jeffrey Carl DeMarcus of Jacksonville, FL; daughter, Denna DeMarcus Grogan of Knoxville; son in law, Don Grogan of Knoxville; granddaughter Kacie Grogan of Johnson City; and many cousins and friends. Family and friends will meet Friday January 29, 2021 at 11:15 am at Tennessee State Veterans Cemetery (John Sevier Hwy.) for an 11:30 am inurnment service officiated by Rev. Dr. Alan Smith. Full Military Honors will be presented by Volunteer State Veterans Honor Guard. An online obituary can be viewed and condolences made at www.rosemortuary.com.

The family of Carl Aubrey DeMarcus created this Life Tributes page to make it easy to share your memories.

Carl Aubrey DeMarcus, 79, of Knoxville, passed away on January...

Send flowers to the DeMarcus family.