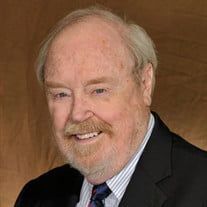 Lundin, Dr. Carl Dean, age 86, of Knoxville, Tennessee passed away peacefully at his home on Tuesday, March 30, 2021 surrounded by his family. Carl was born to Mae Valerie and John H. Lundin on December 16, 1934 in Yonkers, New York. Carl is preceded in death by his parents and his daughter Carole Leigh Lundin Psencik. Survived by his wife Delores “Dee” B. Lundin; daughters Cynthia Lundin Henning (John) and Carrie Lundin Langston (Mark); step-son Jodee W. Jenkins (Corrin); grandchildren Timothy Lundin (Jessica), Nathaniel Henning (Mariya Khan), Corinne Henning, William “Murphy” Henning, Bryce Langston, Hollis Langston, Delaney Langston, and Cora Jenkins; greatgrandchildren Logan Lundin and Willa Lundin. After high school, Carl entered Rensselaer Polytechnic Institute on a Navy ROTC Scholarship and graduated in 1957 with a Bachelor of Metallurgical Engineering. Following his graduation, Carl served 3 years of active duty in the US Navy as a lieutenant before returning to Rensselaer Polytechnic Institute and receiving his Doctorate in Materials Science and Engineering in October 1966. He was appointed an Assistant Professor in the Materials Division and continued as Supervisor of Welding Research. Recently retired, Dr. Lundin came to the University of Tennessee in 1968 as an associate professor to establish the Materials Joining Laboratory in the chemical and metallurgical engineering department, which is now Materials Science and Engineering. Dr. Lundin was appointed Full Professor of Metallurgy in 1975; a position he held for 45 years. Close to 100 graduate students and visiting professors from around the world have performed research in Dr. Lundin’s laboratory resulting in more than 535 technical publications in materials joining and metallurgy. Under his leadership, the research grew beyond his lab, leading to graduate educational courses in materials joining and metallurgy being offered at ORNL and the former combustion engineering plant in Chattanooga. During his tenure in MSE, Dr. Lundin taught metallurgy, materials science, and materials joining classes, and became known as the department’s welding and metallurgy specialist. Dr. Lundin’s world-renowned research and expertise in failure analysis also led to him serving as an industrial consultant to government agencies and the private sector since 1966. Dr. Lundin’s love for teaching and engineering is evident in the numerous awards, honors, and recognitions he received over the years including being named the Tennessee Tomorrow Professor for his contributions to excellence in the college of engineering, Magnavox Professor of Engineering for his excellence in engineering teaching and research, The University of Tennessee, Chancellor’s “Research and Creative Achievement Award” in 1992, and the University of Tennessee College of Engineering Outstanding Teaching Award in 2000. Dr. Lundin belonged to multiple professional organizations holding various leadership positions. In 1986, he was named a Fellow of the American Society for Materials and a Charter Fellow of the American Welding Society in 1991. These appointments recognize those who have made the greatest research contributions to the science of welding, joining, and fabrication of materials. In 2010, Dr. Lundin received the E.O. Paton Award from the International Institute of Welding for his lifetime achievements in the welding metallurgy and welding process fields. In 2012, he presented the prestigious Houdremont Lecture at the International Institute of Welding Annual Conference, and in 2013 was chosen as the AWS District 8 Educator of the Year. Carl enjoyed spending time with his children and grandchildren at his home on Loudon Lake, along with fishing and farming. He had a deep appreciation for the arts and for world travel, especially his many trips to France. Family will be receiving friends Friday, April 2, 2021 from 6-8 pm at Rose Funeral and Cremation - Mann, 6200 Kingston Pike, Knoxville, TN 37919. Private interment will follow at a later date at The Episcopal Church of the Ascension in Knoxville. In lieu of flowers, contributions can be made to The Carl D. Lundin Scholarship Endowment for the Materials Science and Engineering Department at the University of Tennessee, Knoxville. Checks should be made payable to: The University of Tennessee Foundation, Inc. A note on the memo line of the check or an included note should indicate the check is for the Carl Lundin Scholarship Endowment. Donations should be sent to: Engineering Development, 118 Perkins Hall, Knoxville, TN 37996-2012. The website for the development office is: https://tickle.utk.edu/give/ways-to-give/. On-line condolences may be extended at www.rosefuneraltn.com. Arrangements by Rose Funeral and Cremation - Mann.

Lundin, Dr. Carl Dean, age 86, of Knoxville, Tennessee passed away peacefully at his home on Tuesday, March 30, 2021 surrounded by his family. Carl was born to Mae Valerie and John H. Lundin on December 16, 1934 in Yonkers, New York. Carl is... View Obituary & Service Information

Send flowers to the Lundin family.