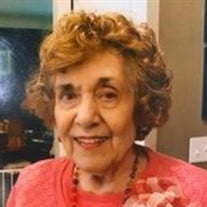 Carnelle Wanda Livingston Starnes, age 94.5 passed away Thursday, November 4, 2021. Carnelle was born in Duffield, Virginia to Echol Roy and Bessie Mae Livingston. She is preceded in death by her brother George Gordon Livingston and her sister Shirley Joanne Vierkandt. She is survived by her sisters Ruble Evelyn McFall and Eddie Aileen Livingston. Carnelle was a devoted wife to Joe Daniel Starnes who predeceased her, and a loving mother to her four children, who survive her: Dr. Daniel Livingston Starnes, Esq. (Debbie) of Nashville, TN, Sandra Jane Starnes, of Raleigh, NC, Elizabeth Starnes Nelson of Knoxville, TN and Thomas Joseph Starnes (Linda) of Orlando FL. She was very proud of her 11 grandchildren and 17 great grandchildren. Considering her age, she was remarkably healthy until her death due to an accidental fall. After graduating from Lincoln Memorial University in Harrogate Tennessee, Carnelle moved to Libby, Montana where she taught school. When she returned to Virginia to continue her teaching career, she lived in Big Stone Gap where she met and later married Joe Starnes. Joe was an FBI agent for 27 years. During Joe’s career with the Bureau, he and Carnelle lived in Trenton, NJ, New York City, Oklahoma City, and Knoxville. Knoxville was the closest field office to their parents in southwest Virginia. Once settled in Belmont West subdivision, and her children were all school age, Carnelle returned to teaching 8th grade Language Arts at Cedar Bluff Elementary/Middle School. After retiring, she spent many years splitting time between her Knoxville home and her condominium in Stuart, Florida. She was active in both cities in Daughters of the American Revolution, and became an accomplished bridge and bingo player, winning more than her share of games. She enjoyed membership in the Society of Former Special Agents Federal Bureau of Investigation. She and her family were long time members of First Baptist Church of downtown Knoxville. Later she attended Concord Baptist. Recently, she relocated to Raleigh, NC. A memorial service will be held at Rose Funeral & Cremation - Mann, 6200 Kingston Pike, Knoxville, TN on Friday November 12, 2021. Receiving of family and friends will be from 10:00am to 11:30am The funeral service will be from 11:30am until noon. The service will be aired live on https://www.facebook.com/RoseMannHeritage.

Carnelle Wanda Livingston Starnes, age 94.5 passed away Thursday, November 4, 2021. Carnelle was born in Duffield, Virginia to Echol Roy and Bessie Mae Livingston. She is preceded in death by her brother George Gordon Livingston and her sister... View Obituary & Service Information

The family of Carnelle Wanda Livingston Starnes created this Life Tributes page to make it easy to share your memories.

Send flowers to the Starnes family.