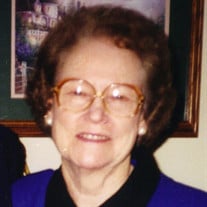 Carrie Lorese Jackson Bowles, age 94, passed away peacefully on Friday, July 2, 2021 in Roswell, Georgia. Lorese was born in North, South Carolina on June 29, 1927 to Altie Lee and Sally Jackson. She grew up in the Columbia area and was introduced to the love of her life, Ted, by a dear cousin. They were married September 3, 1948, and shortly after Ted departed for a second tour of duty in Japan with the Army. Lorese remained in Columbia near family and worked until Ted returned to her and entered the University of South Carolina in 1950. Upon his graduation in 1953, Ted accepted a job with TVA and they moved to Morristown, Tennessee and then to Bridgeport, Alabama. She and Ted eventually settled in Knoxville in 1963 where she made a home with him and their children. They were long time members of Trinity United Methodist Church. She and Ted were married for 63 years when he passed away in 2012. Lorese was the consummate homemaker. She was an excellent cook, seamstress and decorator. Her family was everything to her and taking care of them was her greatest joy. She was a much- loved mother, grandmother and great grandmother whose courage and strength will live on in those who loved her. Lorese was preceded in death by her parents, her great love, Theodore A. (Ted) Bowles, and beloved grandson, Brad Bowles both of Knoxville. She is survived by her daughter and son-in-law, Mary Ann and Bob Morris of Canton, GA, her son Dr. Ted Bowles of Gainesville, FL, her grandchildren Ben Morris of Atlanta, GA, Carly Morris of Canton, GA, Adam (Glynis) Bowles of Lovettsville, VA, Laura Chadwick (Dixon) of Knoxville, Mallory Bowles and Kelly Bowles both of Alexandria, VA; her great grandchildren Monroe Chadwick and Harrison Chadwick of Knoxville and Hazle Bowles of Lovettsville VA, and loving, loyal friend Debbie Fowlkes of Knoxville. Her family would like to thank the devoted caregivers at Brickmont in Milton, Georgia, and especially the ICU nurses at North Fulton Hospital in Roswell, Georgia for their kindness and compassion for Lorese as she peacefully left life on this earth for eternal life with her Savior. Ted and Brad surely rejoiced to be reunited with her. Rose Funeral and Cremation Mann Chapel, 6200 Kingston Pike, is in charge of arrangements. There will be a private family service at East Tennessee Veterans Cemetery chapel on Friday, July 9th with the Rev. Dr. Bob Brown officiating. Online condolences may be made at www.rosefuneraltn.com.

Carrie Lorese Jackson Bowles, age 94, passed away peacefully on Friday, July 2, 2021 in Roswell, Georgia. Lorese was born in North, South Carolina on June 29, 1927 to Altie Lee and Sally Jackson. She grew up in the Columbia area and was introduced... View Obituary & Service Information

Send flowers to the Bowles family.