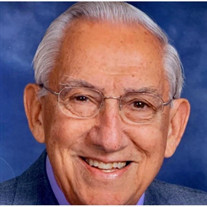 KNOXVILLE - Charles Franklin Brakebill, 97, passed away peacefully in his sleep at home on February 4, 2022. As a child, Charlie grew up on the family farm in Monroe County, graduated Madisonville High School in 1942 and would always remember his roots and friends from Monroe County. After graduation, he entered what would become a lifelong bond with the University of Tennessee when he enrolled to study agriculture. Charlie married Joyce Droke of Memphis, TN on June 5, 1948. They began their life together in Loudon, TN where Joyce worked as a secretary at Loudon High School while Charlie taught Vocational Agriculture. Charlie loved teaching and quite often received calls from former students. Between deployments, he also worked as an ice cream salesman for Bacon Creamery. Charlie and Joyce were also active in the Loudon Methodist Church and made many life-long friends. Charlie’s proud military career began with his enlistment and call to active duty during WWII in April 1943. It was during this time that he would meet Ed Boling and begin their 72-year friendship while participating in the Army Specialized Training Program. From there, Brakebill proceeded to basic training with the 1675th Engineering Utilities Detachment at Camp Claiborne in Louisiana. That September, Charlie landed on Omaha Beach. He often said walking uphill to the sight of 15,000 fresh graves was something he would never forget. His unit was assigned to Rennes, France to help rebuild the city and guard German POWs. Following the end of the European war, Charlie returned home – sailing past the Statue of Liberty on July 4, 1945 – to prepare for deployment to Japan. He was in Washington D.C. when he heard the news of the Japanese surrender and celebrated with the crowd as they listened to Truman’s address. After returning home, Charlie finished his degree and received a commission from the first Air Force ROTC program at U.T. He joined the 134th Air National Guard Unit out of McGee/Tyson which led to two more calls to active duty: one in Korea and the other at Ramstein AFB in Germany during the Berlin Crisis. When Charlie came home from Germany in 1962, Ed Boling and Andy Holt persuaded him to come to U.T. and start the school’s Development Program as Executive Director. Throughout his life, Charlie was always focused on relationships; this was especially true of his work at the University of Tennessee. He mentored numerous staff members on the importance of building connections and careful attention to details. He started the deferred giving program in 1967 and helped build The Development Council for Corporate leaders. Charlie and Joyce worked tirelessly across the state on all campuses, and he was instrumental in bringing the University of Chattanooga into the U.T. family. For many years, he served with the Big Ten Fund Raisers Institute on Mackinac Island. When he retired as Vice President of Development and Alumni Affairs after a 35-year career of service to U.T., this program was considered one of the most successful in the United States. Charlie was always quick to acknowledge that he and Joyce worked as a team, and nothing illustrates this more than their work establishing the Clarence Brown Theatre. They developed a close relationship with MGM Director Clarence Brown and his wife Marian. The Browns’ bequest to the school established the university’s home for the performing arts. Charlie delighted in seeing the program grow and expand. He loved conversing with the students, attending shows and serving on the board. In many ways, the students, administrators, board and employees of the Clarence Brown Theater became more than just a piece of his legacy. They were part of his family. In 2002, Charlie and Joyce moved to Plantation Springs in Knoxville where they enjoyed a beautiful neighborhood and wonderful friends. He was a member of Ebenezer United Methodist Church and, true to character, became involved in fundraising and Sunday School until his health declined. Charlie was preceded in death by his parents Alvin Brunner Brakebill and Theresa Mae Blair, his brother Alvin Eugene, and his wife Joyce. He is survived by his daughter, Linda B. Norris, and son, Dr. Larry C. Brakebill and wife Jeanie, of Knoxville, TN; grandchildren John (Riann) Bilderback of Chattanooga, TN, Jenny (Rusty) Edwards of Halifax, Nova Scotia, David (Kristin) Bilderback of Lenoir City, TN, Keith Brakebill of Seattle, WA, Christopher (Lauren) Brakebill, Erin (Ryan) Pate and Brian (Caroline) Brakebill all of Knoxville, TN; and great-grandchildren Ben Bilderback, Addison Edwards, Luke Bilderback, Karolina Brakebill, Charleston Brakebill, Eleanor Brakebill, Nora Pate, Lane Pate, and Emerson Brakebill, loving niece, Susan (James) Lewis. The most important thing to Charlie was his relationship with God and his family. He loved his children, grandchildren, and great grandchildren. He could not have been prouder of each one, and he was so blessed to have time to spend with them. Until her recent death, Janet Allen was a caretaker and friend to Charlie for many, many years. She was just like a sister to him. For the last couple of years and briefly after Joyce’s death, Lisa Matichak was his main caretaker. Words cannot express the family’s appreciation for their kindness and care. The will be a Graveside Service for the family at East Tennessee State Veterans Cemetery on Lyons View Pike on Tuesday, February 15, at 1:00 P.M. Celebration of life will be Monday, February 21 at 7 pm in the Clarence Brown Theatre on the campus of the University of Tennessee. Due to limited seating, please confirm your attendance for the evening at https://tinyurl.com/brakebillmemorial. The family requests that masks be worn inside the CBT In lieu of flowers, the family requests donations be given to Ebenezer United Methodist Church , 1001 Ebenezer Road, Knoxville 37923. or Clarence Brown Theatre— donations can be made to the Clarence Brown Theatre. Checks, made payable to the University of Tennessee, can be mailed to 206 McClung Tower, Knoxville, TN 37996, Attn: Brakebill Memorial, or online at www.clarencebrowntheatre.com/donate. Online condolences may be made at rosefuneraltn.com.

KNOXVILLE - Charles Franklin Brakebill, 97, passed away peacefully in his sleep at home on February 4, 2022. As a child, Charlie grew up on the family farm in Monroe County, graduated Madisonville High School in 1942 and would always remember... View Obituary & Service Information

The family of Charles F. Brakebill created this Life Tributes page to make it easy to share your memories.

Send flowers to the Brakebill family.