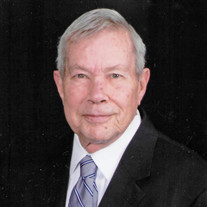 Charles Edgar Clark, 86, died at home on June 21, 2021 after a brief illness. Ed was born at home on May 11, 1935 in Calvin, Louisiana, to Charles Henry Clark and Eddie Lee Drummond Clark. He was raised in the mill town of Hodge, LA and graduated from Jonesboro-Hodge High School. He hitch-hiked or rode the bus to Louisiana Tech University, 30 miles from Hodge, and graduated with a bachelor’s degree in Mathematics in 1957. In the same year, Ed accepted a position with an aviation engineering company in Dallas. In August, 1957, Ed married his high school friend and college sweetheart Glenda Carol Woods, and after two years in Dallas, Ed and Glenda moved to Baton Rouge, LA where Ed earned his Masters and PhD degrees in Mathematics from Louisiana State University. During their time in graduate school, their daughters Lori and Karen were born. Ed’s teaching career began at the University of Missouri in 1965; in 1969, he accepted a position as a mathematics professor at the University of Tennessee. He retired from UT after 31 years of teaching and research. Ed, like his father, enjoyed carpentry and woodworking: he built picture frames, desks and bookcases for his daughters and a beautiful hanging desk for Glenda. In retirement, Ed and Glenda took lessons in ballroom dancing. They were active members of the Tennessee Ballroom Dance Association and the Bronze Club, a local ballroom dance club. Ed loved college sports, and he and Glenda had season tickets to UT home basketball games for over 20 years. He loved swing-era big bands, good gumbo, spicy Mexican food, Ott’s BBQ, bad puns, word games and puzzles of all kinds. Ed was predeceased by his parents and his sister Faye Adcock. Ed is survived by his wife Glenda, brother George and his wife Dianne Clark, sister-in-law Sheri Norred, daughters Karen Cottrell and Lori Malvern, son-in-law Gary Malvern, grandchildren Jennifer Cottrell Bruce, Katie and Jordan Cottrell, Alex Malvern and great-grandsons Dillon and Brett Bruce, as well as a host of nephews, nieces and cousins. The family is planning a small private memorial later this summer. Memorial contributions can be made to the charity of your choice. Arrangements by Rose Funeral and Cremation - Mann. Online condolences may be made at www.rosefuneraltn.com.

Charles Edgar Clark, 86, died at home on June 21, 2021 after a brief illness. Ed was born at home on May 11, 1935 in Calvin, Louisiana, to Charles Henry Clark and Eddie Lee Drummond Clark. He was raised in the mill town of Hodge, LA and graduated... View Obituary & Service Information