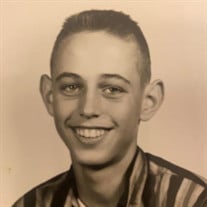 Charles Merle Everett, 76, died October 30, 2021 after a year-long battle with cancer. He was born on September 29, 1945 in Knoxville, Tennessee. Charles, or “Charlie” as his friends knew him, was the son of E.L. and Margaret Hewlett Everett. He was raised in Fountain City, going to church, playing baseball with his friends and enjoying every minute of his life to the fullest. Upon graduating from Central in 1963, he joined the U S Navy and bravely served until his discharge in 1966, whereupon he returned to Knoxville and attended the University of Tennessee. Soon after he met and eventually married Rebekah (Becky) Sue Corum of Farragut. Charlie worked for TVA for 17 years, then at Lowe's and then became a independent subcontractor. He enjoyed spending time with his children and was extremely active in the West Knox County Little League program as a coach and field caretaker. Later in his life he could always be found at his local Weigel's getting a coffee and visiting with his neighbors. Charlie’s mother Margaret Everett was a founding member of the Church of the Good Shepherd in Fountain City and later in his life Charlie and his wife Becky became members of The Church of the Good Samaritan in Cedar Bluff. Charlie is preceded in death by his parents, E.L. and Margaret Hewlett Everett, his sister Doris Atkins (Milburn). He is survived by his brother John (Chung Sul) and his wife of 49 years, Rebekah, as well as their children: Jennie Caissie Bates (Bryan), Charles “Chip” Alvin Everett, Jason Michael Everett (Caitlin), and Sara Elizabeth Everett. He will be missed by his grandchildren: Devyn and Ryan Caissie; and twins August and Arrow, and Remy Charles Everett. A Celebration of Life will be held on Thursday November 11, from 5-7pm at Rose Funeral & Cremation - Mann, 6200 Kingston Pike, Knoxville, TN 37919. A graveside service will be held Friday November 12 at 3pm at Edgewood Cemetery, 229 S Gallaher View Rd, Knoxville, TN 37919. Friends and family are invited to attend either service or both. Online condolences may be made at www.rosefuneraltn.com

The family of Charles Merle Everett created this Life Tributes page to make it easy to share your memories.

Send flowers to the Everett family.