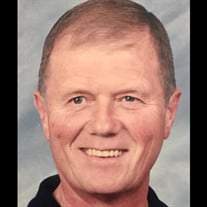 Charles Edward McHenry, Jr. (Ed) loved God, his family, Fireballs, the Great Smoky Mountains, chocolate Pinwheels cookies, the Tennessee Vols, and being out in nature. Ed was a true East Tennessean and enjoying the outdoors was his favorite pastime. While fishing, hunting, and camping, he would often comment on God’s beautiful world. One of his favorite hikes was to Max Patch along the AT but he loved many well-known trails including Mt. LeConte, Alum Cave Bluffs, Chimney Tops, Abrams Falls, Gregory’s Bald, and Charlie’s Bunion. He was known to hike up the Chimney Tops trail and then go down the steep back side while ignoring signs that said, “no entrance/trail closed.” He’d ask, “do you think they’re talking about us?” with a sly smile. The whole family took a cruise to Alaska, and he talked about the sites and animals years later. He loved nature far more than any city destination. Ed could spend a whole day on a drive to nowhere, believed you should never come and go on the same route and loved to wander around car lots looking at cars. He was known for going for an oil change and bringing home a new car. He taught his daughters to drive a stick shift by taking them to 17th Street in Knoxville and using the clutch. He was a prankster and never known for being a good student. Ed graduated from Bearden High School in 1962 before attending Hiwassee College, which he swore he was only admitted to because he was a pastor’s kid. He had high expectations for his two daughters and worked hard to ensure they graduated from private colleges. Ed was a natural salesman and extrovert. He worked for Tate & McCallie, Bayer Aspirin, Warner Lambert, Havatampa Cigars, King Collision, and became an entrepreneur later in life when he started a courier business and a vending machine business, Northwest Vending. He had a soft heart, and it didn’t take much to bring a tear to his eye, especially if his daughters or granddaughter did something that made him proud. He was always proud of his girls and granddaughter and frequently would talk to his friends about their latest accomplishments, especially his granddaughter. Ed was a friend to many, a counselor to some, a teacher, disciple, Deacon, father, son, husband, hiker, nature lover, golfer, father-in-law, granddad, and a believer. He taught teenage, young adult, and older adult Sunday School classes, coached basketball, and was a member at Norwood United Methodist Church, Powell United Methodist Church, and Wallace Memorial Baptist Church. He also served as a Deacon at Wallace. Ed was born in San Francisco, only child of Charles E. and Mary Helen Chamberlain McHenry. He grew up in West Haven and served in the Army National Guard where he met friend and future brother-in-law Larry Turner. He met Martha Jane Turner at Bethlehem Church where his father was the pastor, and they married on July 14, 1967. Ed is survived by his wife Jane and daughters Allison McHenry Bough (Scott) of Norfolk, Virginia, and Amy McHenry Knowles (Jon) of Powell, Tennessee and one granddaughter, Sheelove Castor Knowles. The family would like to thank the staff of Morning Pointe of Powell, Care Around the Block particularly Melissa Smith, Amedisys Hospice, and Island Home Park & Rehab for their loving care of Ed over the past few years. In lieu of flowers, donations can be made in Ed’s memory to SEED International that works to empower and equip people in Haiti (https://seedinternational.givingfuel.com/seed-online-giving) or Alzheimer’s Tennessee (https://www.alztennessee.org/give/donate-now). The family will receive friends from 2:00-4:00pm on Sunday, February 6, 2022, at Wallace Memorial Baptist Church, with a service following. Burial will be 2:00pm Monday, February 7, 2022, at Roseberry Baptist Church in Mascot. Online obituary may be viewed and condolences extended at www.rosefuneraltn.com

Charles Edward McHenry, Jr. (Ed) loved God, his family, Fireballs, the Great Smoky Mountains, chocolate Pinwheels cookies, the Tennessee Vols, and being out in nature. Ed was a true East Tennessean and enjoying the outdoors was his favorite... View Obituary & Service Information

The family of Charles Edward McHenry, Jr. created this Life Tributes page to make it easy to share your memories.