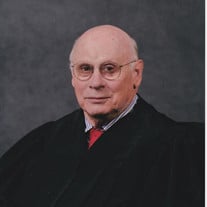 Guided by his strong Catholic faith of Eternal Life, Judge Charles D. (Charlie) Susano, Jr., 86, passed away peacefully surrounded by his family on May 7, 2022. Judge Susano was born in 1936 in Knoxville to Charles D. and Eloise (Dondero) Susano, Sr. Both preceded him in death as did his brother, Michael. He is survived by his loving and devoted wife of 57 years, Carolyn, son Stephen of Nashville and his wife, Ana, daughter Maria Susano of Arlington, VA, son, Charles III of Knoxville and his wife Robin, and Preston Warren, who he loved like a son, of Dallas and his wife Lynn. He is also survived by his brother, Tommy, brother-in-law David King and his wife Jennifer, and six adored grandchildren, Sophie, Jacob, Madison, Sydney, Hanna and Hudson. His remarkable life and career were all the more extraordinary because for the last 30 years, Judge Susano was confined to a wheelchair after a sleep-walking accident left him paralyzed from the chest down. He never considered himself handicapped, saying “I’m only handicapped if I let myself be. At worst, I have been challenged, forcing me to reinvent new ways to negotiate the new times.” A prayerful and faithful man, Judge Susano always relied upon God to steer him in the correct direction. His early values were formed and honed by his Catholic upbringing, first at home, then at Knoxville Catholic High School, where he was captain of the basketball team that won the Sixth District Championship in 1954. Anyone who knew the Judge also knew that one of his greatest joys was his alma mater, the University of Notre Dame, where he graduated magna cum laude from Notre Dame’s College of Commerce with a major in accounting in 1958. He could always be found, and often heard, in front of the TV on fall football Saturdays cheering for the Irish. Drafted into the United States Army in 1958, he was honorably discharged in 1960 and moved back to Knoxville to enroll at the University of Tennessee College of Law where he was a member of the Law Review and graduated Order of the Coif in 1963. He then served in the inaugural group of law clerks to the Tennessee Supreme Court, clerking for Chief Justice Hamilton S. Burnett. Judge Susano began his successful legal career in private practice, first at Bernstein, Susano & Stair, and later at Susano, Sheppeard, Giordano & Swanson. He served on the advisory committee to the Tennessee Supreme Court on Civil Rules and served his community on numerous nonprofit boards and in many capacities at his beloved Cathedral of the Sacred Heart. His legal career took a momentous turn in March 1994, when then Governor Ned Ray McWherter appointed him to the Tennessee Court of Appeals, Eastern Section. Subsequently, he was elected to the Court of Appeals on statewide ballots in 1994 and then again in 1998, 2006 and 2014. He served as Chief Judge of the Court of Appeals from 2013 to 2015, retiring in April 2020 as Tennessee’s longest serving appellate judge and with a prolific body of work that included over 1,000 opinions. Judge Susano was the recipient of the Justice Frank F. Drowota III Outstanding Judicial Service Award in 2017, received the Knoxville Bar Association’s Courage in the Face of Adversity Award in 2004 and the American Board of Trial Advocates, Tennessee Chapter Appellate Judge of the Year in 2003. Judge Susano embraced technology to assist his mobility in everyday life, which allowed him to meet the statewide responsibilities of his office. He continued to drive daily and was frequently seen zipping around downtown Knoxville in his motorized wheelchair from the courthouse to Gay Street for a constant stream of lunch and meetings. A man of wide and diverse interests, he reveled in his Italian cultural heritage, his passion for Notre Dame Fighting Irish football, and relished his lifelong friendships. By all accounts and reckoning he was a humble man who lived an extraordinary life. The Susano family would like to express their gratitude for all of the support from the Knoxville community and especially the caregivers and the UT Hospice team for their kind and compassionate care. The family will receive friends in Knoxville on Monday, May 16th from 5:30 – 7:30 pm at the Cathedral Hall at Sacred Heart and the funeral mass will be on Tuesday, May 17th at 10:00 am at the Cathedral of the Most Sacred Heart of Jesus. We request that everyone attending the mass park on the south side of the Cathedral. Arrangements by Rose Funeral & Cremation – Mann. www.rosefuneraltn.com. In lieu of flowers, donations may be made to The Judge Charles D. Susano, Jr. Memorial Scholarship Endowment at the University of Tennessee College of Law, Attn: Ellen Cole, Director of Advancement at UT College of Law, 1505 Cumberland Ave., Suite 248, Knoxville, TN 37996. Donations may also be made to the disABILITY Resource Center, Attn: Brook Rogers, 9111 Cross Park Dr. Suite E 135, Knoxville, TN 37923.

Guided by his strong Catholic faith of Eternal Life, Judge Charles D. (Charlie) Susano, Jr., 86, passed away peacefully surrounded by his family on May 7, 2022. Judge Susano was born in 1936 in Knoxville to Charles D. and Eloise (Dondero)... View Obituary & Service Information

The family of Judge Charles D. "Charlie" Susano Jr. created this Life Tributes page to make it easy to share your memories.

Send flowers to the Susano family.