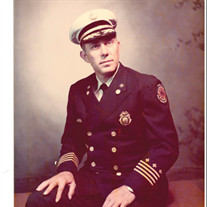 At this most special time of year, the family of Chief William G. “Bill” Potter, is rejoicing that he will be celebrating Christmas in Heaven. The primary focus of his life was his sweetheart of 67 plus years, Roberta Lones Potter, and his children and grandchildren. From the time his was a little boy, living two doors down from Fire Station #7, he wanted to be a fireman. He not only became a fireman, but continued to move through the ranks to become Deputy Chief of Firefighting for the Knoxville Fire Department before retiring after 47 years of service. Together, Bill and Roberta grew their family to include children, Julie, Abbie, Boog and Betsy, and grandchildren, Mike, Brian, Heather, Rebekah, Cody, Annie, Casey, Logan, Addison and Corson. As a young man, Bill served in the U.S. Naval Reserve and later in life, became a member of the patriotic fraternal Junior Order organization rising to serve as Tennessee State and National Councilor. Other activities that brought him joy were singing in choirs and a gospel quartet, serving as an ordained deacon as well as golfing, fishing and camping with family and friends. Bill was preceded in death by his parents, Lloyd and Dosha Potter, his brothers Homer and Arnold, and his daughter Betsy. He is survived by his wife Roberta, brothers David and Frank, his children, grandchildren, great grandchildren, nieces, nephews and many wonderful friends. A graveside service will be held at Highland Memorial Cemetery at 3:00 this Sunday afternoon, December 20, and the family requests attendees please adhere to social distance guidelines. Friends and loved ones are encouraged to meet at Bill’s home church, Marble City Baptist, located at 2740 Sutherland Avenue, in the parking area at 2:30 for a procession to the cemetery led by the Fire Engine from Station #7. Friends may also call at their convenience from 1:00 to 3:00 on Saturday. Arrangements by Rose Mortuary Mann Heritage Chapel. Online condolences may be made at www.rosemortuary.com. If you are unable to attend, services may be live streamed at https://www.facebook.com/RoseMannHeritage

At this most special time of year, the family of Chief William G. &#8220;Bill&#8221; Potter, is rejoicing that he will be celebrating Christmas in Heaven. The primary focus of his life was his sweetheart of 67 plus years, Roberta Lones Potter,... View Obituary & Service Information

At this most special time of year, the family of Chief William...

Send flowers to the Potter family.