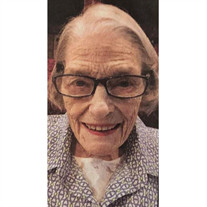 Claire Hamil Shepherd of Knoxville died August 22, 2021. Mrs. Shepherd was born in Blakely, Georgia on August 24, 1920. She attended Shorter College in Rome, Georgia and then moved to Columbus, Ga where she worked as an accountant in a paper and business supplies company. In Columbus, she met an Army officer stationed at Ft. Benning, the late Col. Joe R. Shepherd, and they were married January 23, 1949 at the First Methodist Church in Blakely, Georgia. As an Army officer’s wife, Mrs. Shepherd travelled around the world, never staying in one place more than three years. She lived in Kansas, California, Germany, Atlanta, Hawaii, Colorado, Washington DC, and Knoxville. While fulfilling her role as an Army officer’s wife, Mrs. Shepherd developed a love for entertaining that served her well when organizing social events and service activities with other military wives. Col. and Mrs. Shepherd moved to Knoxville in 1966 when Col. Shepherd became Professor of Military Science at the University of Tennessee. When Col. Shepherd retired from the Army in 1969, Mrs. Shepherd began her civilian life. She was active at Church Street United Methodist Church, worked in community volunteer jobs, joined the Andrew Bogle Chapter of the DAR, was active in the Athene Cub and was a long-time member of the East Tennessee Alabama Alumni Association. Mrs. Shepherd was preceded in death by her mother, Annie Irene Butler Hamil; her father, Joseph Alexander Hamil; her husband, Col. Joe R. Shepherd; and her brother, Joseph Alexander Hamil, Jr. She is survived by her daughter, Susan Claire Shepherd Kramer; son in law, Louie D. Kramer of Ooltewah and her nephews William Joseph Hamil of Johnson City and John Thomas Hamil of Rockwell, TX. The family thanks the caregivers whose attention and care allowed Mrs. Shepherd to continue to live in her home. These include Johnnie Lee, Ursula Hall, Melissa Waggoner and Reba Cranford. The family will receive friends at Rose Funeral and Cremation - Mann on Kingston Pike on Tuesday, August 24 between 3:00 and 5:00 PM. A celebration of life service will be held, Wednesday, August 25 at 11:00 AM at Church Street United Methodist Church. A graveside service will be held on Friday, August 27 at 10:00 AM in Blakely, Georgia. In lieu of flowers, donations may be made to the Library Fund or the UMW Missions Fund, at Church Street United Methodist Church, 900 Henley Street, Knoxville, Tennessee 37902. Arrangements by Rose Funeral and Cremation – Mann. Online condolences may be made at rosefuneraltn.com.

Claire Hamil Shepherd of Knoxville died August 22, 2021. Mrs. Shepherd was born in Blakely, Georgia on August 24, 1920. She attended Shorter College in Rome, Georgia and then moved to Columbus, Ga where she worked as an accountant in a paper... View Obituary & Service Information

Send flowers to the Shepherd family.