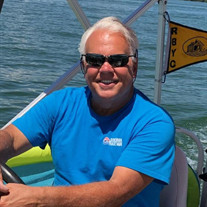 Dale Stanley Steichen, age 67, passed away on Wednesday, December 22nd at his home in Vonore, TN. He grew up in Turlock, CA, graduating from Turlock High School in 1972. His love of science and a first job of cleaning the city pools led Dale to study chemistry in college, gaining his bachelor’s degree from California State College Stanislaus in 1976. Thanks to some advice from a favorite professor, Dale went on to pursue a PhD in Organic Chemistry from the University of California Los Angeles, studying singlet oxygen photochemistry under the direction of Professor Christopher Foote. At UCLA, Dale loved teaching introductory organic chemistry courses and participating in the Graduate Student Association, which led to his eventual position as graduate chairperson of the ASUCLA. While at school, he met the love of his life, Sandy, after being set up on a blind date by a couple of close friends. The two had a whirlwind romance, getting engaged after 3 months, and marrying within a year. In 1981, Dale graduated from UCLA and took his first post-grad job at Clorox in Pleasanton, CA. There he became an expert in personal care chemistry, surfactants, and doing more loads of laundry to optimize experimental detergents than he could count. In 1989, Dale and Sandy welcomed their first daughter, Stephanie. Two years later, in 1991, the family moved to Danbury, CT, where Dale took on a new role at Akzo Nobel, the company where he would spend the remainder of his career. The family had another addition in 1995, their second daughter Samantha. Together with Dale, the Steichen family took on many adventures, including moves to Sweden, Chicago, and then back to the East Coast. At Akzo Nobel, Dale worked his way up to Vice President of Research and Development, publishing numerous scientific articles, book chapters, and patents. In 2016, Dale and Sandy retired to beautiful Vonore, TN, after building their dream home in Rarity Bay. Throughout his life, Dale enjoyed a diversity of interests, ranging from motorcycle racing to astrophysics to competitive swimming (at the Turlock Aquatics Club) to bonsai trees to scuba diving to organic chemistry to politics to wine tasting to perfecting his golf game to inventing new soup recipes (much to the chagrin of his wife). Most of all, he loved doing those things with his friends and family across the world. Everyone who met Dale commented on his smile, his laugh, his life-of-the-party energy, his intellect, his hugs, his heart, and his many stories, which he loved to share. Dale is preceded in death by his loving father and mother, Francis and Marjorie (Henderson) Steichen. Dale is survived by his wife of 41 years, Sandy Steichen, his daughter Stephanie Steichen (his favorite scuba buddy) and her partner Ben Thompson, his daughter Samantha Steichen (his favorite golf partner) and her fiancé Devin Finch, his sister Diana Knudsen and her husband Ted, his sister Sherry Lumley and her partner Butch Ergen, and his brother Mark Steichen and his wife Laura, as well as numerous nieces, nephews, and friends. A Celebration of Life service is being planned for a later date, however, contributions in Dale’s memory can be made to The Gary Sinise Foundation and condolences shared at www.rosefuneraltn.com/obituaries. Dale “Armadillo King” Steichen will be dearly missed by all those who knew and loved him.

Dale Stanley Steichen, age 67, passed away on Wednesday, December 22nd at his home in Vonore, TN. He grew up in Turlock, CA, graduating from Turlock High School in 1972. His love of science and a first job of cleaning the city pools led Dale... View Obituary & Service Information

Send flowers to the Steichen family.