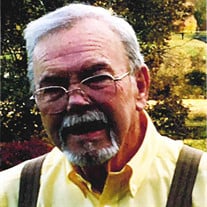 Daniel William Corbett, 81, of Maryville, TN, passed away in the loving embrace of his darling wife of 54 years on March 3rd, 2021. Born on November 6th, 1939 in Watertown, NY, Daniel was the big brother to his 3 sisters, Elaine, Jenny, and Colleen. Dan was a decorated combat veteran who began his service to our country in the US Navy as a radar operator. He then served in the US Army as a Chief Warrant Officer flying Hueys in Vietnam where he survived being shot down and seriously wounded in combat in 1970. Never one to boast or look for special recognition for his service and sacrifice to our country, Dan would only regale family and friends with funny or exciting antidotes about his time in the military, and his medals could be found in the bottom of a footlocker collecting dust. Dan’s quiet dignity is an example to us all. An avid outdoorsman, Dan loved hunting and fishing, and he spent many a cold morning roaming the Arizona desert with his sons, Jason and Brandon, hunting small game or calling coyotes. Dan was also a talented country musician who sang with David and Danielle Hendry. Sometimes he would even serenade his Judy with their song, “Try to Remember.” Daniel took fashion cues from no one as evidenced by his commitment to wide suspenders (often with no belt when he was feeling dangerous), pocket tees or flannel shirts, and tuques. For Dan, the Brits have the best form of humor, a Waffle House means pull over, SPAM is the perfect protein, every household has a Phantom, and there was not a conversation that could not be enriched with a hot cup of coffee and a cigarette, hunger pangs that could not be satisfied with a peanut butter sandwich, or a mood that could not be improved by saying “pull my finger.” At the end, we were all comforted to know the only voice Dan recognized and the only voice that could soothe him was the love of his life, Judy. And now our world will be slightly less funny, musical, loving, and gassy without him in it. . Daniel is preceded by his parents, Daniel Isaiah Corbett and Eleanor Margaret Corbett, his sister Jenny Davies; and brother-in-law and good pal, David Hendry. Daniel is survived by his wife, Judith Corbett; his children, Jason Corbett, Brandon Corbett, and Tina Duque; his sisters, Elaine Hendry and Colleen Bellinger; daughter-in-law, Suzanne Corbett; sisters-in-law, Peg Mickelson and Sammie Judd and their spouses Paul Mickelson and John Judd; brother-in-law, Carl Forester; niece, Danielle Bettencourt; his 10 grandchildren and 1 great grandchild. Family and friends will gather at 12:15 pm March 9th, 2021 at East Tennessee State Veterans Cemetery (John Sevier Hwy) for a 12:30 pm graveside service with Rev. John Justice officiating. Military honors will be conducted by the Volunteer State Veterans Honor Guard. Online condolences may be extended at www.rosemortuary.com.

Daniel William Corbett, 81, of Maryville, TN, passed away in the loving embrace of his darling wife of 54 years on March 3rd, 2021. Born on November 6th, 1939 in Watertown, NY, Daniel was the big brother to his 3 sisters, Elaine, Jenny, and... View Obituary & Service Information

The family of Daniel William Corbett created this Life Tributes page to make it easy to share your memories.

Daniel William Corbett, 81, of Maryville, TN, passed away in...

Send flowers to the Corbett family.