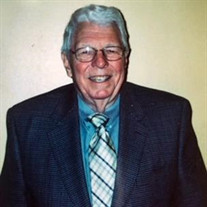 It is with profound sadness, but also with sincere gratitude for a beautiful and blessed life, that the family of David Farnsworth Baker, Jr. announces his death on January 27, 2021. He was 92 years of age. Early Wednesday morning, Mr. Baker, also referred to as “Dave” or “Grandaddy” by his loving friends and family, passed away peacefully in his sleep next to his devoted wife, after meeting each other in high school 76 years ago. Born on March 25, 1928, this Knoxville native was the son of David F. Baker, Sr. and Josephine Knaffl Baker. He began his leadership and future passion for community service at a young age as an Eagle Scout, which then led him to being honored as Senior Patrol Leader of Troop 5. Dave received his early education at Knoxville High School, where he was a member of the football team (‘43-‘45) that were State champions in both 1944 and 1945. He was also a member and President of Esquires Boys High School Social Club. In 1950, he graduated with a Bachelor of Science degree in Business Administration from The University of Tennessee, Knoxville. While at UT, Dave was a member of the Sigma Alpha Epsilon fraternity, where he developed many of his life-long friendships. In that same year, he also married the love of his life and soulmate, Gene Alexander. They were the first to be married in the new Sequoyah Hills Presbyterian Church. The high school sweethearts paved the way with pure legacy and grace as true role models for their three loyal sons and future grandchildren. A longtime member of Sequoyah Hills Presbyterian Church, Dave taught Sunday School to high school students for several years, and also served as both Deacon and Elder. His compassion for helping others also shined at the Knoxville Rotary Club, where he was an Honorary Member and former Board Member for over 50 years. Dave spent 42 years of his professional career with Woodruff’s, where he was Vice President of Woodruff’s Inc. in downtown Knoxville and Woodruff’s Century House Ethan Allen and Henredon Galleries on Kingston Pike. His employees and business associates were like family to him. He also worked in Sales with June & Ed Davis at Davis Carpets for over 10 years. He then joined Home Choice Flooring on Kingston Pike, where he was a Karastan and Masland carpet specialist until his retirement. He was appointed to serve for many years on the Knoxville Transit Authority and was also a Business Manager of “The Church Presence” exhibit at the 1982 World’s Fair. He served as an Officer and on Board Directors for many civic and social organizations including: President of the Downtown Knoxville Association, Vice President and Director of Cherokee Country Club and The Knoxville Tourist Bureau, in addition to being a Board Member of the Knoxville Chamber of Commerce, Knoxville Symphony Society, American Red Cross and many others. Always flaunting a huge smile and positive attitude, “Grandaddy” never lost his sense of humor, genuine love for his family and many friends, and pure devotion to the church. He loved his Lord with all of his heart. He had a huge passion for golfing, fishing, UT Athletics (anyone who ever watched a football game with him would know of his passionate, yet competitive spirit) and music...in particularly, Jazz and Dixieland. A striking example of strength, compassion and loyalty, he showed all of us how to give, how to love and how to make others feel important. He was a true reflection of what it means to be totally selfless, and always seeing the best in others. He is preceded in death by mother, Josephine Knaffl Baker, father, David F. Baker, Sr. and mother-in-law, Emogene Alexander Compton. Survived by the love of his life and wife of 70 years, Gene Alexander Baker. Three sons: David F. Baker III and wife, Melanie of Nashville and children, Elizabeth and David F. Baker, IV (Worth); Thomas Alexander Baker and wife, Michelle and children, Carolyn, Sophia, Chloe and Cristian; Joseph Kennett (Kent) Baker and wife, Stephanie and children, Alexandra (Lexie) and Emeline (Emelie) Baker, all of Knoxville. Brother-In-Law, James Thomas (J.T.) Alexander and wife, Barbara and several cousins, nieces and nephews, and his many, many friends, including their beloved Supper Club, of over 65 years, “The Fork and Foam”. The family would also like to express its deep appreciation and heartfelt thanks, in particular to Patsy Bailey and Rose Ammerman, for their kindness and care of their father and “Grandaddy” for the last two years of his life. Mr. Baker’s body will be cremated, and a “Celebration of His Life” service will be held on Monday, February 1, 2021 at Sequoyah Hills Presbyterian Church at 1pm with Rev. Dr. Jay Howell and Rev. Mark Hampley officiating. There will be a live stream service available at http://www.sequoyahchurch.org/live-streaming/ His family is very grateful for the extended time they were all granted with him, to learn from him, and also for the many gestures of kindness he received from others closest to him. What a life of 92 beautiful years. He was deeply loved and will be greatly missed by so many. In lieu of flowers, memorial contributions may be made to Sequoyah Hills Presbyterian Church’s Music program, 3700 Keowee Avenue, Knoxville, TN 37919. Please note “in memory of David F. Baker, Jr.” Arrangements by Rose Mortuary Mann Heritage Chapel. Online condolences may be made at www.rosemortuary.com There will be a live stream service available at http://www.sequoyahchurch.org/live-streaming/

It is with profound sadness, but also with sincere gratitude for a beautiful and blessed life, that the family of David Farnsworth Baker, Jr. announces his death on January 27, 2021. He was 92 years of age. Early Wednesday morning, Mr. Baker,... View Obituary & Service Information

It is with profound sadness, but also with sincere gratitude...

Send flowers to the Baker family.