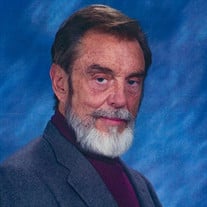 Dr. David M. Creasman, Jr. died at the age of 86 on Monday, November 29, 2021. Dr. Creasman had a long career in Knoxville as a dentist and a member of several hospital committees. He was born on January 6, 1935, in Cleveland, Tennessee to David Monroe (Roe), Sr. and Maizie Murphy Creasman. David was reared in the St. James Hotel on Market Square where his father was hotel manager. He attended West High School and was a member of the football team and co-captain of the track team, graduating with honors in 1953. He attended the University of Tennessee-Knoxville and graduated with honors from the University of Tennessee-Memphis College of Dentistry in 1958 as a Doctor of Dental Surgery. While in Memphis he was a class officer, a member of the honor society Delta Sigma Delta, and participated in several athletic programs of the university. David served in the US Navy Dental Corps from 1959-1961 in San Diego, California, during which time he was assigned sea duty on board the submarine tender USS Sperry. He was honorably discharged from the Naval Reserves in 1972 as a Lieutenant Commander. During his practice in Knoxville from 1961-1989, David also had hospital appointments to East Tennessee Baptist Hospital, Fort Sanders Presbyterian Hospital, East Tennessee Children’s Hospital, St. Mary’s Hospital and the University of Tennessee Research Center and Hospital. At the University of Tennessee Medical Center, he was a volunteer faculty responsible for clinical teaching, conducting hospital rounds, and attending residents. In addition to his vocation as dentist, David had several passions. Having grown up in downtown Knoxville, he had a profound appreciation of the outdoors. He had a creative spirit which he expressed through painting, road building on his property, and various home construction projects. He had an entrepreneurial spirit which led him to operate the Old Bond/Appalachian Marble Quarry, where he assisted with providing additional pink marble to the Smithsonian Museum for renovations and the construction of the National Gallery Sculpture Garden. He was involved with the community through various volunteer and leadership positions with Big Brothers/Big Sisters, Interfaith Health Clinic, Sertoma Club of West Knoxville, and Habitat for Humanity. He participated in dental mission trips to Nicaragua, Costa Rica and Guatemala through the Holston Conference of the United Methodist Church. He was a member of First Baptist Church Bluegrass, after many years at St. Mark United Methodist Church, Knoxville. David is preceded in death by his parents and brother, Donald Reid Creasman. He is survived by his daughters Kimberlyn Brown (Ken) of Maryville and Lisa Creasman (Steve Underwood) of Baton Rouge, and step-sons John Shaw of Louisville and Rob Shaw of Knoxville; granddaughters Sarah Carroll (Jeremy) of Matthews, NC and Abbey Underwood of San Diego; and great-grandsons Oliver and Miles Carroll of Matthews, NC. The family would like to thank the staffs at Brookdale Sandy Springs of Maryville and Caris for their loving care of David and his family. Funeral services are scheduled for Thursday, December 9, 2021. Following a private family interment at Highland Memorial Cemetery, a memorial service will be held at 2 pm at Rose Funeral and Cremation Mann Heritage Chapel, 6200 Kingston Pike, Knoxville, TN 37919, with Receiving of Friends to follow. In lieu of flowers, donations may be made to First Baptist Church Bluegrass (1907 Ebenezer Rd, Knoxville, TN 37922) or a charity of your choice. Arrangements by Rose Funeral and Cremation - Mann. Online condolences may be made at rosefuneraltn.com.

Dr. David M. Creasman, Jr. died at the age of 86 on Monday, November 29, 2021. Dr. Creasman had a long career in Knoxville as a dentist and a member of several hospital committees. He was born on January 6, 1935, in Cleveland, Tennessee to... View Obituary & Service Information

Send flowers to the Creasman family.