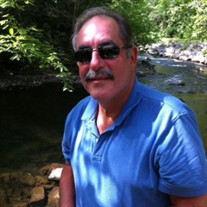 David Ross Frew, Sr., 65, was born on September 21, 1956 and died April 1, 2022 in Townsend, Tennessee. He is predeceased by his parents David Frew and Louise Christie Frew. Ross is survived by the love of his life and ever devoted wife, Diana Cox Frew, their two sons, David Ross Frew Jr. of Townsend, Tennessee and Travis Edward Frew of Birmingham, Alabama, his siblings Chris Hardin and John Frew (Susie), nieces and nephews. Ross was born in Chicago, Illinois. The family moved to Knoxville, Tennessee during Ross’s high school years. He attended the University of Tennessee School of Engineering and later enlisted in the United States Navy as an Electronic Technician and Nuclear Reactor operator in the Navy Nuclear Submarine program for 10 years. Ross met his wife, and they were married October 2, 1982. They were stationed in New York where Ross taught other submariners and then assigned to New London, Connecticut. Ross became a civilian in 1987 when they moved to Homestead, Florida and he was hired by Florida Power and Light, working at Turkey Point Nuclear Plant in Homestead, Florida. They relocated to Miami where they raised their two Sons. Ross retired in Townsend, Tennessee and continued to consult for nuclear plants in the South East. Ross was often described as the perfect “family man” who loved his wife, sons, and their four Scottish Terriers. Ross enjoyed sports and was a die hard Miami Heat fan as well as a fan of the Chicago Bears and UT Volunteers. He was also an avid motor sports enthusiast. A memorial service will be held at 2:00 pm on Saturday, May 7, 2022, with visitation starting at 1:00 pm at Central United Methodist Church, 201 3rd Avenue, Knoxville, TN. 37917. In lieu of Flowers, the family requests that memorial donations be made to Central United Methodist Church https://knoxcentralumc.org/get-involved/giving/. The family invites you to share thoughts, fond memories, and condolences online at rosefuneraltn.com.

David Ross Frew, Sr., 65, was born on September 21, 1956 and died April 1, 2022 in Townsend, Tennessee. He is predeceased by his parents David Frew and Louise Christie Frew. Ross is survived by the love of his life and ever devoted wife, Diana... View Obituary & Service Information

Send flowers to the Frew family.