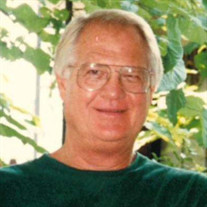 Donald Barry Preston died peacefully Thursday, December 9, 2021. A lifelong resident of Knoxville, TN, Don was born on June 6, 1937 and adopted by Margaret and Frank Preston. Don was a lifelong member of St. John’s Episcopal Cathedral and served as an acolyte in his youth and later as an usher. He graduated from West High School in 1955 and went on to be a proud Volunteer, graduating from the University of Tennessee in 1959 where he was a member of the Sigma Alpha Epsilon fraternity, manager of the men’s basketball team, and a member of the swim team. Don married Nancy Orr from Bolivar, TN on October 19, 1961. Shortly after, he was deployed to Germany with the Air National Guard during the Berlin Crisis. Don and Nancy were happily married and recently celebrated their 60th anniversary this past October. He spent the majority of his life working in the insurance industry which he retired from in 1996. He stayed active in the Knoxville community during his retirement by being instrumental in the start of the Episcopal School of Knoxville. Don was an avid watch collector, thoroughly enjoyed walking his dog, and spent time relaxing on the beach at Hilton Head Island. Don is survived by his wife, Nancy, three children, Barry, Taylor (Paige), and Kay (Shannon), and six grandchildren Chad, Stewart, Ryan, Mary Hayes, Alex, and Reese. During his life, Don was an abiding son, a devoted husband, a loving father and grandfather, and an exceptional friend. All who had the pleasure of knowing Don, even for the briefest of moments, knew he was one of the most humble, generous, kind-hearted people one will ever meet. He gave much and asked for little in return. He will be greatly missed and never forgotten. A Funeral Service will be held on Monday December 13th at St. John's Episcopal Cathedral at 4:00 p.m. The family will receive friends following the service in the Great Hall. Arrangements by Rose Funeral and Cremation - Mann. In lieu of flowers, please give memorials in Don's name to St. John's Episcopal Cathedral, 413 Cumberland Ave., Knoxville, TN 37909. Online condolences may be made at rosefuneraltn.com.

Send flowers to the Preston family.