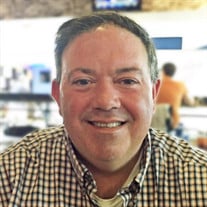 Douglas Wayne Coble, 55 , of Knoxville, Tennessee passed away on Thursday, October 7, 2021. Funeral Services will be conducted on October 30th at Rose-Mann Heritage Chapel 6200 Kingston Pike Knoxville, TN 37919. The family will receive friends from 2-4pm and the service will follow at 4pm. He was born to Larry and Diana Coble on November 28, 1965 in Burlington, North Carolina. After attending the University of North Carolina, Douglas joined the U.S. Navy and served for four years before becoming a radiation safety officer. In 2004, he received his Bachelor’s of Science and Technology in Nuclear Technology. Douglas met his wife, Jennifer Grannan, in 1986 and they were married on December 12th, 1987. Together they had four children, Jessica (Brandan Turnbo) , Rachael (Hunter Kendrick), Megan (Tyler Martin), and Charlie. Douglas enjoyed cooking, boating, fishing, and spoiling his dogs. To honor Douglas’ lifelong love for dogs, we invite you to donate to Smoky Mountain Service Dogs at www.smokymountainservicedogs.org. He is survived by his parents, his sister Teresa Vieten, his children, twelve nieces and nephews, and his two grandsons Riley Coble and Joseph Kendrick.

Send flowers to the Coble family.