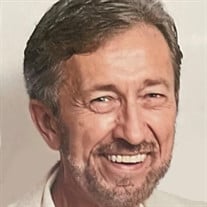 Edward "Skip" O'Donnell passed away on September 29, 2021 at the age of 73, in his home in Knoxville, Tennessee. His battle with Parkinson's in recent years robbed his body of so much, but never his spirit, his faith, nor his compassion. Despite the cognitive and physical challenges, Ed stayed strong and positive until the end with his soulmate, Cathy, by his side every step of the way. Ed always loved singing and was in numerous bands while growing up in Albany, New York. He came close to living out his childhood dream of becoming a rock star with his college band, which went on to become Blue Öyster Cult. Ed instead finished grad school and had a successful career as an industrial engineer for firms like GE and Denso. Ed never stopped singing, however, and was a beloved regular at karaoke bars throughout most of his life. When Ed moved to South Carolina he not only picked up a Southern accent, but also met the love of his life, Cathy. A devoted family man, over the years Ed and Cathy lived in numerous cities and raised three wonderful children together, Michael O'Donnell, Shawn Mason, and Katie Peterson. Ed got to spend his last days with his family including his seven grandchildren, Hudson, Eli, Emmett, Amelia, Kyleigh, Luke, and Sam. Ed is also survived by his two younger brothers Bill and Bob, numerous other relatives, and countless friends. If you knew Ed, you know he was a hard one not to love. He had a big personality, a big heart, a great sense of humor, and an unwaveringly positive outlook on life. He will be fondly remembered by family and friends as a loving husband, engaged father and grandfather, faithful friend, and devout Christian. Ed faced death like he faced most days of his life, with a big smile and a positive attitude. To celebrate his life and legacy, a memorial service is planned for his birthday on October 29th. In lieu of flowers, please donate in tribute to the Michael J Fox Foundation at michaeljfox.org/donate. Arrangements by Rose Funeral and Cremation – Mann. Online condolences may be made at rosefuneraltn.com.

Edward "Skip" O'Donnell passed away on September 29, 2021 at the age of 73, in his home in Knoxville, Tennessee. His battle with Parkinson's in recent years robbed his body of so much, but never his spirit, his faith, nor his compassion. Despite... View Obituary & Service Information

Send flowers to the O'Donnell family.