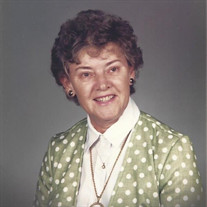 Ernestine “Ernie” McCall Dougherty, 96 years young, of Knoxville, TN passed away on Thursday, July 29, 2021 after enjoying a life of love, family and friends. Ernie was born on September 11, 1924 in Walnut Ridge, Arkansas to Ed and Roberta McCall. Being an only child, she had a childhood filled with the love and companionship of numerous aunts, uncles and cousins and her incredible grandmother that instilled in her the love of God and how to make a penny stretch like a dollar. After graduation from Walnut Ridge High School (Go Bobcats !), she was employed as a civilian secretary for the United States Air Force, working at Blytheville, Arkansas Air Force Base. This was an exciting time for Ernie with the nonstop action of the base, and the opportunity to entertain the service personnel at the USO managed by her mother Roberta (MomBob as the grandchildren knew her). When World War II ended, Ernie headed to Little Rock, Arkansas to further her career and experience life. In Little Rock, she moved into a boarding house apartment where she met some life-long friends, and more importantly, the Love of her life, Ralph W. Dougherty. A romance that lasted over 55 years, immediately blossomed and the two created a life that was dedicated to God, each other and their family that was to come. Ernie and Ralph were blessed with three children, Linda Carol, David Blane and Scott Alan. Raising their children in North Little Rock, Arkansas until 1975, they then moved to Knoxville, Tennessee where Ralph’s career continued and Ernie created a loving home and developed strong relationships with friends and their new church, Cedar Springs Presbyterian. After Ralph’s retirement, both spent countless hours dedicating their time to the church, volunteering for Meals On Wheels and other community events. After Ralph’s passing, Ernie cherished the fellowship of her Sunday School class “Saints Alive” where she enjoyed being the unofficial class secretary and going to Sunday lunch with close friends. Ernie enjoyed the last nine years residing at Arbor Terrace of Knoxville, where she was welcomed into Arbor’s family with open arms and loving hearts. She enjoyed her quiet time studying about God, watching her bird friends, taking day trips with Erin and winning numerous games of Bingo. Her explanation on winning so many games was that “most of the time, I was that only one that could hear!”. Ernie is predeceased in death by her parents, her ever loving husband of 55 years, Ralph, and an incredible daughter, Linda Carol Isaacs. She is survived by Linda’s children, Rachael and husband Derek, Max and wife Bennett and Adie and husband Sean. Also survived by David and wife JoAnne and Scott and wife Janet. Ernie had eight grandchildren (Linda’s children) Rachael, Max and Adie, (David’s children) Jackie, Ashley and Olivia (Scott’s children) Tyler and Kayla. She also was blessed with ten great grandchildren, Axel, August, Josie, Marshall, Linda, Ralph, Roan, Xavier, Peyton and newcomer Grayson (coming 9-17-21). In lieu of flowers, please support Ernie and Ralph’s favorite charity, Mobile Meals Kitchen (Meals on Wheels), 1747 Reynolds St., Knoxville, TN 37922. There will be a graveside service honoring Ernestine’s life held on Saturday, August 7th at 1:00pm Highland Memorial Cemetery in the Mausoleum Chapel, the family will remain to talk to friends following the service. Rose – Mann is honored to serve Ernie’s family. Online condolences at www.rosefuneraltn.com. The service will be livestreamed at https://www.facebook.com/RoseMannHeritage.

Send flowers to the Dougherty family.