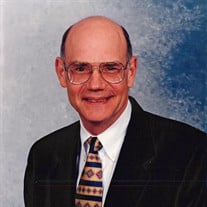 Eugene Lewis Frazer, Jr. (Gene), age 85 of Knoxville, TN, died November 15, 2020 at home. He was born May 29, 1935 to Eugene L. Frazer and Mary Varina Gaither Frazer of Nashville who preceded him in death. He was also preceded by his oldest grandson, Patrick Yurek, and his sister-in-law Geneva Murr Ailor. He is survived by his wife of 52 years Constance Murr Frazer, his son Scott A Frazer (Melissa), his daughter Shannon Frazer Yurek (Jason), his grandchildren, Meghan Yurek, Nolan Yurek, Maggie Frazer, Gene Frazer, Clara Frazer, Joann Frazer, and Constance Frazer, his sister Varina Frazer Buntin (Jeffery) of Cross Plains, his brother Marshall Frazer (Virginia) of Nashville. He was also survived by 3 nieces, 6 nephews, 6 great nieces, and 5 great nephews, and sister-in-laws Carolyn Murr of Powell and Sue Ottinger of North Carolina. Gene received a Bachelor of Arts degree from Vanderbilt University in 1957. He was commissioned 2nd Lieutenant in the United States Army. He was a Captain when he was honorably discharged in 1965. He began his career with Travelers in Nashville and was transferred to Knoxville. He earned his CPCU designation in 1966. In 1968 he joined Shafer Insurance Agency. He was named Vice President in 1969. He earned an Associate in Risk Management in 1993 and Associate in Automation Management in 1995. He was on the Agency Advisory Councils for Aetna Insurance Co. Insurance Company of North America, St. Paul Fire and Marine, and Indiana Insurance Company. He served in many offices for the Insurors of Knoxville, Insurors of Tennessee, Greater Smokey Mountain Chapter of CPCU including President for each organization. He had several articles published in insurance publications. He retired from Shafer in 2001. He was a partner in Laymon Frazer Risk Managers for several years beginning in 2002. He was inducted into the Insurance Hall of Fame in 2015. Gene was a member of St. Mark United Methodist Church for 46 years where he served as an usher and on many committees. He was a member of the Holston Conference Board of Trustees from 2002-2007. He taught the seminar for new Trustees from 2008-2012. He served on the Episcopacy Committee and the District Board of Church Location. He was active in civic and charitable organizations including West Knoxville Sertoma Club, Foster Care Review Board, Free Medical Clinic of America, Board of Wesley House Community Center, Big Brother and Big Sister, United Way of Greater Knoxville, Boy Scouts Troop 20, coached youth soccer and the Pilot Oilers baseball team. A graveside service will be held on Friday at 1:00 PM at Woodlawn Cemetery with Rev. David Graybeal officiating. The service will be streamed live on Rose Mortuary Mann Heritage Chapel’s facebook page https://www.facebook.com/RoseMannHeritage . Memorials may be made in Gene’s name to a charity of your choice. Arrangements by Rose Mortuary Mann Heritage Chapel. Online condolences may be made at www.rosemortuary.com.

Eugene Lewis Frazer, Jr. (Gene), age 85 of Knoxville, TN, died November 15, 2020 at home. He was born May 29, 1935 to Eugene L. Frazer and Mary Varina Gaither Frazer of Nashville who preceded him in death. He was also preceded by his oldest... View Obituary & Service Information

The family of Eugene Lewis Frazer Jr created this Life Tributes page to make it easy to share your memories.

Send flowers to the Frazer family.