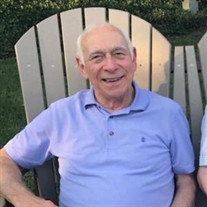 Evan Charles Sturm of Knoxville Tennessee, age 92, of Knoxville, passed away Tuesday July 13th, 2021 following a battle with cancer, Evan passed with his devoted brother by his side. Evan was a loving and kind man to all who knew him. He was a special brother, loving grandpa, caring uncle and a dear father. Evan cherished his family, his group of tennis friends and the Knoxville community. He enjoyed and welcomed family and friends to his home to share delicious shabbat meals for many years. Evan was known for his homemade challahs, he would always have one in hand to share. He played tennis until his mid 80’s and then he continued his love for gardening. Evan was born in 1929 in Middlesboro, Kentucky. As the youngest of four brothers, he was the first to be born in a hospital. He studied architecture at University of Cincinnati and earned a bachelor’s degree from the University of Kentucky in 1952. He served in the United States Navy from 1953-1954 during the Korean War. Evan spent several years running the family business in Jellico after the untimely death of his father. He went on to open Sturm’s Youth World in Knoxville. Evan was a successful business owner for 35 years, with his store playing an active role in the growing Knoxville community. After his retirement, he offered his expertise by being on the board of the Knoxville Jewish Day School, and he became an active member at Temple Beth El. For many years he taught computer skills to seniors and he provided individual support to a handful of seniors supporting them in extraordinary ways. Evan was preceded in his death by his brother, Melvin Sidney Sturm and his parents Louis Henry and Beatrice Cawn Sturm. He is survived by son and daughter in law, Gary and Tamara Sturm and his grandchildren Frank and Heidi Sturm. Brothers, Howard Sturm of Los Angeles and Hirim Sturm of Atlanta. Evan was a devoted and loved Uncle to many nieces, nephews, grand nieces and nephews and many beloved cousins including Sam Balloff and Mary Ann Merrill both of Knoxville. He cherished his friends dearly. In lieu of flowers, please send memorial contributions to Stanford Eisenberg Jewish Day School or Temple Beth El in Evan Sturm’s honor. A graveside service was held 10:00 AM Friday at New Jewish Cemetery with Rabbi Erin Boxt and Rabbi Yossi Willhelm officiating. Online condolences may be sent to www.rosefuneraltn.com. Arrangements provided by Rose Funeral and Cremation Mann Chapel.

Evan Charles Sturm of Knoxville Tennessee, age 92, of Knoxville, passed away Tuesday July 13th, 2021 following a battle with cancer, Evan passed with his devoted brother by his side. Evan was a loving and kind man to all who knew him. He was... View Obituary & Service Information

Send flowers to the Sturm family.