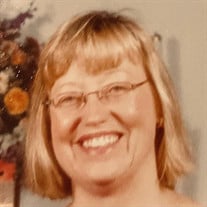 Gail B. McDaniel (Hurt), 61 years old, passed away peacefully on Mother’s Day, May 9, 2021, at the University of Tennessee Medical Center (UTMC) after a courageous battle with cancer for 13 months. Gail was born in Denver, Colorado where her parents later moved family to Johnson City, TN. Gail earned a BA in Business and German at East Tennessee State University (ETSU) in Johnson City, TN, and a MA in Economics at the University of Memphis in Memphis, TN. After college she worked at Williams and Sonoma, Inc in Memphis, TN for 12 years until moving to Knoxville, TN to work at TVA for the past 20 years, a job she truly loved and enjoyed. Gail is preceded in death by her father and mother, Samuel W. and Ina F. Hurt (Dingus). Surviving is her son Jason McDaniel and daughter-in-law Erin of Missoula MT, sisters Gina Hill, and Pamela Huggins and brother-in-law Jeff of Knoxville TN, brothers Gregory Hurt and sister-in-law Sharon of Kingsport TN, Timothy Hurt of Johnson City TN, and her beloved cat Ingrid who was a constant companion, along with numerous extended family members. Special thanks to Dr. Kathrine Smyth, supervisor and friend Victor Nunes, dear friend Julie Graves, Dr. Soto and all the staff at UTMC, and all the others that are too numerous to list. In lieu of flowers donations can be made to the National American Cancer Society via www.cancer.org. A celebration of life will be announced at a later time. Arrangements by Rose Funeral and Cremation - Mann. Online condolences may be made at www.rosefuneraltn.com.

Gail B. McDaniel (Hurt), 61 years old, passed away peacefully on Mother&#8217;s Day, May 9, 2021, at the University of Tennessee Medical Center (UTMC) after a courageous battle with cancer for 13 months. Gail was born in Denver, Colorado where... View Obituary & Service Information

Obituary for Gail B. McDaniel

Send flowers to the McDaniel family.