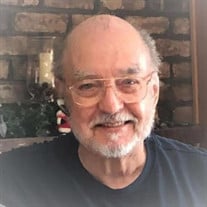 Airman Second Class Gene Atchinson, 86 passed away peacefully surrounded by friends and family at Fort Sanders Regional Medical Center, Knoxville, TN on Tuesday August 10, 2021. Gene was a decorated veteran who served during the Korean War and spent 3 years 11 months in the Air Force. Gene Atchinson was born on August 7, 1935 in San Jose, CA to his parents Francis Clifford and Jean Atchinson. When he was 17, he joined the US Air Force and was stationed at Lowry AFB in Colorado. While serving in the aftermath of the Korean War, Gene spent time abroad in Hawaii Hickum AFB. While home on leave in Sacramento, CA he fell for Margaret Freeze and they were soon married in December of 1957. Gene and Margaret settled in the town of Sacramento, CA. After moving to Livermore, CA Gene started working at Valecitos Nuclear. He worked at Valecitos for 10 years and eventually settled down in Knoxville, TN where he retired. When Gene wasn’t working, he had a passion for God, family, deep-sea fishing, hunting, golf and bowling. He was an active member of Awaken City Church Knoxville. Gene was predeceased by his parents, loving wife Margaret Atchinson, his son Brian Atchinson, daughter-in-law Teresa Atchinson and brother Don Atchinson. He is survived by his sister Carroll(Darrell) Hedge, brother Gary(Dorothy) Atchinson, daughter Karen(Marvin) Rivera, son Gene Atchinson, son Cliff Atchinson, son Mark Atchinson, son Steven(Bella) Atchinson, daughter Janai Atchinson and daughter-in-law Debbie Atchinson . 14 grandchildren, 19 great grandchildren and 1 great-great grandchild along with several nieces and nephews. Funeral service will be held at 11am on August 19, 2021 graveside at Pleasant Forrest Cemetery Farragut, TN 37934. On-line condolences may be extended at www.rosefuneraltn.com Arrangements by Rose Mann Funeral and Cremation.

The family of Gene Atchinson created this Life Tributes page to make it easy to share your memories.

Send flowers to the Atchinson family.