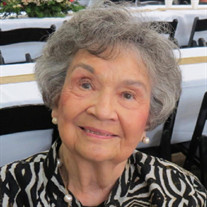 Gene Baker, also referred to as “Mimi” by her loving family and grandchildren, passed away peacefully on Easter Sunday, April 17, 2022. Born January 4, 1930, in Madisonville, KY, Gene was the daughter of Emogene and James Thomas Alexander. The family moved to Knoxville when she was in high school, where she met the (late) love of her life, David Farnsworth Baker, Jr. over 76 years ago. They attended the University of Tennessee together where she became a member of not only the Delta Delta Delta Sorority, but The Junior League of Knoxville, The Nine O’Clock Cotillion and the Junior Assembly. In 1950, she married her high school sweetheart and soulmate, David F. Baker, Jr., where they were the first to be married in the new Sequoyah Hills Presbyterian Church. They paved the way as true role models of legacy and love for their three future sons and grandchildren. Gene continued her path of leadership and devotion for community service by becoming the President of the Travel Industry Marketing Executives and the Women in Travel Society, President of Garden Study and Cherokee Hills Garden Clubs, and a Board Member of the Women’s Guild of Knoxville Symphony Society and the Traveler’s Aid Society. In 1979, she started her business career as the Convention Services Director for the newly formed Knoxville Convention & Visitor’s Bureau. She continued her career with the new Holiday Inn World’s Fair and the Airport Hilton, in preparation for the 1982 World’s Fair. In 1984, Gene continued her career for the next four years with the Downtown Knoxville Hilton, which then led her to rejoin the Knoxville Convention & Visitors Bureau as Sales Manager for State & Location Organizations, where she worked there until her retirement. Mayor Victor Ashe and Tommy Schumpert honored Gene at her retirement party by proclaiming that July 1st 2002 was “Gene Baker Day” in Knoxville. Always radiating goodness and a huge smile, “Mimi” never lost her genuine love for her family (and many friends), and pure devotion for the church. She had a huge passion for all types of music, particularly jazz, and was an accomplished pianist. Her late husband used to say, “If you can hum it, she can play it. And, play in any key.” Gene was an avid golfer (former runner-up of the Women’s Club Championship at the Cherokee Country Club), and a huge fan of cheering on UT Athletics and the Atlanta Braves. She was very social, loved playing at various Bridge Clubs, and helped create ‘The Fork & Foam’ Supper Club with other couples in 1956. A true example of loyalty and compassion, Gene showed all of us how to love and bring out the best in others. She is preceded in death by her mother and father, Emogene & James Thomas Alexander, and the love her of life and husband, David F. Baker, Jr. (Dave). Survived by her three sons: David F. Baker, III and wife Melanie of Nashville and children, Elizabeth and David. F. Baker, IV (Worth); Thomas Alexander Baker and wife, Michelle and children, Carolyn, Sophia, Chloe and Cristian; Joseph Kennett (Kent) Baker and wife Stephanie and children, Alexandra (Lexie) and Emeline (Emelie) Baker, all of Knoxville; brother James Thomas (J.T.) Alexander and wife Barbara of Knoxville; five cousins and their families from Kentucky and Alabama and many, many friends and business acquaintances. The family would also like to express their deep appreciation and heartfelt thanks to Sammi, Ashley, Andrena and Bobby at Westmoreland Health and Rehab and to Patsy Bailey and Rose Ammerman, for their kindness and quality care. A “Celebration of Her Life” service will be held at 3:00 on Thursday, April 21, 2022 at Rose Funeral Home, 6200 Kingston Pike, Knoxville, Dr. Jay Howell officiating. Receiving of Friends will be from 2:00-3:00 pm. An online obituary and guestbook is available at www.rosefuneraltn.com. The service will be livestreamed at https://www.facebook.com/RoseMannHeritage. Gene’s family is very grateful for the extended time they were all granted with her. She was deeply loved and will be greatly missed by many. In lieu of flowers, memorial contributions made by made to the music department of Sequoyah Hills Presbyterian Church.

Gene Baker, also referred to as &#8220;Mimi&#8221; by her loving family and grandchildren, passed away peacefully on Easter Sunday, April 17, 2022. Born January 4, 1930, in Madisonville, KY, Gene was the daughter of Emogene and James Thomas... View Obituary & Service Information

Gene Baker, also referred to as “Mimi” by her loving family and...

Send flowers to the Baker family.