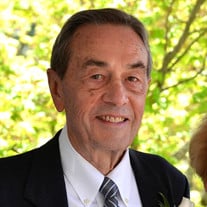 George P. Chandler, of Knoxville, died on January 4, 2022 a few weeks shy of his 90th birthday. Born in Knoxville, Tennessee, George received his Bachelor’s of Science degree in engineering from the University of Tennessee. He then graduated from The George Washington University in Washington, D.C. with a Juris Doctor degree. Subsequently he held positions at the United States Patent Office, National Aeronautics and Space Administration, Monsanto Company and Eastman Chemical Company from which he retired in 1995. George served in the United States Navy during the Korean War. George and Marion Josephine Tapp were married in 1958. They lived in Washington, D.C. and Decatur, Alabama for several years—and in Kingsport, Tennessee for 39 years. There he served as a Deacon and Elder at First Presbyterian Church. For five years he served on the Board of Directors of Holston Habitat for Humanity and Kingsport Community Ministry Center. George was also a member of the Tennessee Bar and Kingsport Bar Association. Since retirement, much of his time was spent doing volunteer work. George and Marion returned to Knoxville in 2005 where he was a member of Cokesbury United Methodist Church. Marion; parents William L. and Gene Polk Chandler; sisters Betty Chandler Sutton and Anna Chandler Treadway preceded him in death. George married Dorothy Kishbaugh on April 13, 2013 and she died on March 10, 2019. He is survived and will be deeply missed by daughter Lindsay Wright of Knoxville and grandson Daniel Wright and wife Dionny, great-granddaughter Sumera Wright, all of Gulfport, MS; son Polk Chandler and wife Beth, grandson Graham, all of Kingsport, TN; sister-in-law Hulinda Henderson of Knoxville—and her son Jeff and daughter Alicia; niece Linda Kramer of Ashburn, VA; nephew Barry Treadway of Rockville, MD; nephews Greg Rothery of Knoxville and Bill Rothery of Kenesaw, GA; Dorothy’s children: Janice Walls of Dayton, OH; Scott Kishbaugh of San Ramon, CA; Mark Kishbaugh of Chicago, IL; Greg Kishbaugh of Indianapolis, IN; and several other extended family and friends. The Graveside Service will be held on Saturday, January 15th at 1:00pm at Berry Highland Memorial Cemetery, with Rev. Dr. Alan Smith officiating. In lieu of flowers, memorial contributions may be made to First Presbyterian Church, 100 W. Church Circle, Kingsport, TN 37660 or Cokesbury United Methodist Church, 9919 Kingston Pike, Knoxville, TN 37922. Rose Funeral and Cremation-Mann is honored to serve the Chandler family and invites you to view and sign their online guestbook at rosefuneraltn.com.

George P. Chandler, of Knoxville, died on January 4, 2022 a few weeks shy of his 90th birthday. Born in Knoxville, Tennessee, George received his Bachelor&#8217;s of Science degree in engineering from the University of Tennessee. He then graduated... View Obituary & Service Information

The family of George P. Chandler created this Life Tributes page to make it easy to share your memories.

Send flowers to the Chandler family.