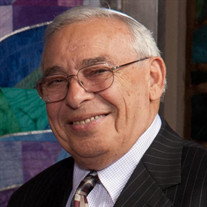 George Messing (Sept 2, 1933 to May 28, 2021) - George Messing passed away of natural causes on Friday, May 28th, 2021. George was a Holocaust survivor, a native of Budapest, Hungary, who met his future wife, Helene, after his family moved from Hungary to Germany to Paris, France following WWII. After a couple of years of marriage, they moved to North Bergen, NJ from Paris in 1957 and he was drafted into the US Army shortly thereafter. A tailor by trade, he, his dad and his brother began working in the garment district in New York City and became owner operators of Messing & Sons, manufacturing leather & suede coats. George was an avid sports enthusiast who played water polo as a teen and who played amateur soccer until his mid30’s. After moving to LaFollette, TN to run “The Leather Factory”, he quickly became a fan of all UT sports. He loved attending UT football and basketball games (Vols & Lady Vols) as well as following UT men’s tennis. He also loved attending and supporting his children and grandchildren as they participated in football, baseball, basketball, soccer and other sports. He was preceded in death by his parents, Mano & Gisele Messing and his brother, Robert Messing. He is survived by his wife of 65 years, Helene, his sons, Patrick (Nora), Michael (Joyce), Daniel (Karen), nephews (Marc, Bruce & Bernard), grandchildren (Jason, Elyse, Andrew, Zack, Brandon & Jacob) and great-grandchildren (Jaden, Aaliyah & Miles). He was close to his sister-in-law, Annette Messing and he also loved his cousins and other family still living in his birthplace in Hungary. A graveside service will be held 10:30 AM Tuesday, June 1, 2021 at New Jewish Cemetery with Rabbi Alon C. Ferency officiating. In lieu of flowers, please send any donations to Heska Amuna Synagogue, 3811 Kingston Pike, Knoxville, TN 37919. Online condolences may be sent to www.rosefuneraltn.com. Arrangements provided by Rose Funeral and Cremation Mann Chapel.

George Messing (Sept 2, 1933 to May 28, 2021) - George Messing passed away of natural causes on Friday, May 28th, 2021. George was a Holocaust survivor, a native of Budapest, Hungary, who met his future wife, Helene, after his family moved from... View Obituary & Service Information

The family of Mr. George Messing created this Life Tributes page to make it easy to share your memories.

Send flowers to the Messing family.