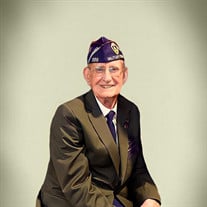 Gerald D. Clark, Sr., age 95, husband, father, patriot, and Christian minister of the gospel, born August 15, 1925, passed away on Sunday, April 18, 2021, surrounded by his loving family and friends. Gerald was a leader in the veteran’s affairs programs of Knoxville, TN, and as a life member and lay pastor of the Church of God (Anderson, IN). Gerald was preceded in death by his wife of 72 years “Bea” (nee Green); his father, Homer Allen Clark and mother, Emma Clark (nee Rowland), and stepmother, Wilma Clark (nee Wampler); his daughter Emma Mae Piscitelli; his brothers Jimmy, Jack, Bill, and Stanley Clark, and sisters Thelma and Opal. He is survived by his sons Gerald D. Clark, Jr. (Margaret E. Clark), Alan Clifford Clark; daughters Karen Sue Orr (Thomas S. Orr) and Marcia Ann Lloyd; sisters Evelyn Smith, Virginia Firth, (Wayne Firth); brother Ron Clark (Kathy Clark); his grandchildren Kelly Spilbor and Kim Nagy, Emily Clark, Jean Marie Johnson, Daniel, Jacob and Steven Clark, Billy Lloyd, Michelle Morales, and nine great-grandchildren. Gerald was a veteran of WWII and was a recipient of the Purple Heart for injuries suffered during the Battle of the Bulge in 1944. He fought with the 75th Infantry Division, which famously helped halt a major German offensive in 1945. During his lifetime Gerald became an advocate for veterans and was recognized for his efforts by Knox County which declared August 26, 2016, as “Gerald Clark Day”. A tribute was read into the Congressional Record in the US House of Representatives by Representative Tim Burchett (2nd District) on April 22, 2021, which recognized his work on behalf of veterans in leading the effort to build a health facility, Ben Atchley Tennessee State Veterans Home, in Knoxville. The campus was named in his honor as the Gerald Clark Memorial Campus. He was instrumental, along with his wife, Beatrice, in the leadership of the Knoxville Chapter 24 of the Disabled American Veterans (DAV). Gerald was also a member of the American Legion, the Military Order of the Purple Heart, Veterans of Foreign Wars (VFW), and the American Veterans Association (AMVETS). A native of Cocke County (Newport), TN, he was born at home on August 15, 1925. Returning from the war, he married Beatrice Green in 1946 and, following a short time working in his father’s sawmill, moved to Knoxville where he enrolled in and graduated from Coopers Business Institute. Shortly after graduation, he was employed by Tennessee Valley Authority (TVA) where he worked for 32 years retiring as a Field Auditor. He was a CPA and attended night school at the University of Tennessee. In retirement, he served briefly as an Interim CFO for Knoxville College. He was a lifelong and beloved member of the First Church of God in Knoxville and served in many of its offices and briefly as its Interim Pastor. He was an active participant in the Tennessee Church of God State and National Ministerial Associations. He was the liaison for the national Church of God radio program in the fifties, “The Christian Brotherhood Hour”, aired on a local Knoxville radio station. Gerald’s family will miss their father, granddad, and brother and his wisdom, advice, and care for them. His friends will miss his loyalty and friendship and we will all miss his stories of life, hardship and love told with humor and affection. A memorial service will be held on Friday, July 16, 2021 at ROSE FUNERAL & CREMATION BROADWAY 1421 N. Broadway Knoxville, TN 37917. The family will receive friends from 9:30 am to 10:30 am with a memorial service to follow officiated by Rev. Jason Scott, Pastor of the First Church of God. Following services at the church a 12:30 pm interment will be at the East Tennessee State Veterans Cemetery, 2200 E. Governor John Sevier Hwy, Knoxville, TN 37920. In lieu of flowers donations may be made to the Knoxville Chapter 24 of the Disabled American Veterans and the American Diabetes Association, Online obituary may be viewed, and condolences shared at www.rosefuneraltn.com.

Gerald D. Clark, Sr., age 95, husband, father, patriot, and Christian minister of the gospel, born August 15, 1925, passed away on Sunday, April 18, 2021, surrounded by his loving family and friends. Gerald was a leader in the veteran&#8217;s... View Obituary & Service Information

The family of Gerald D. Clark Sr. created this Life Tributes page to make it easy to share your memories.