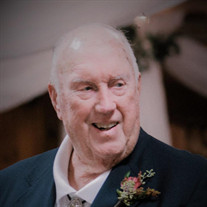 KNOXVILLE, TN – Gerald “Jerry” Clark Durant, 88, of Knoxville, TN, went to be with our Lord on January 22, 2021 at the University of Tennessee Medical Center, Knoxville. A live/online service will be held at The Cathedral of the Most Sacred Heart of Jesus, Knoxville, TN, Saturday, February 13, at 1:00 p.m. with Fr. Gilbert M. Diaz presiding. Burial will be held at a future date and time at Sunnyside Cemetery, Morristown, NY. Jerry was born February 19, 1932 in Ogdensburg, NY to Ross C. and Verna A. (McLean) Durant. He graduated from Morristown Central School in 1951 where he excelled in football, basketball, and baseball, to include achievement as a top ten career scorer in basketball. Jerry married his high school sweetheart and love Patricia “Patty” Ellen Moore on July 21, 1953 at St. Mary’s Cathedral, Ogdensburg, NY. Jerry and Patty together lovingly raised six children in Morristown, NY. Jerry was a man of many talents. After growing up on the family dairy farm on the English Settlement Road, he began his multi-faceted career proudly serving as a Deputy Sheriff, Criminal Division, with the St. Lawrence County Sheriff’s Department, Canton, NY, in the 1950’s under Sheriff Henry G. Denner. He then supervised and managed the Esso (later Exxon) Petroleum Storage and Transfer Facility in Ogdensburg from 1959 until his retirement from Exxon in 1979. As a dedicated public servant, Jerry was also an active member of the Morristown Volunteer Fire and Rescue Squad for thirty-eight years, serving in various officer positions including department chief. He also served his community as the Town of Morristown Town Justice and Magistrate from 1967-1981, and as a Morristown Town Councilman until 1986. As an entrepreneur, Jerry, with his wife Patty, owned and operated the Windmill Motor Inn & Restaurant on Route 37, Morristown, from 1976 – 1986. As a talented craftsman and builder, Jerry built a replica windmill in front of the business in honor of the historic Stone Windmill in Morristown. Jerry also built the restaurant portion of the business, then transformed the restaurant into a successful convenience store and gas/fuel station prior to selling the business in 1986. After moving to Lakeland, FL in 1986 and later to The Villages, FL, Jerry continued his public service, working as a supervisor in the security and fire & rescue departments at The Villages, where he received multiple honors for coordination and collaboration with municipal and county law enforcement and rescue services in Sumter and Marion counties in Florida. For the past seven years, Jerry and Patty resided in East Tennessee. Jerry utilized his many craftsman talents over the years by constructing backyard buildings for the public. He also enjoyed working on various home building projects for and with his children. Arguably, Jerry’s greatest construction accomplishment occurred in the 1990s wherein he oversaw the design and construction with his son Dave of the Ramada Limited Hotel and Conference Center in Alpine, TX. Jerry also oversaw construction of Twin Peaks Self Storage in Alpine and renovation and new construction of The Stable Performance Cars, a classic and muscle car showcase business owned by his son Dave, also in Alpine, TX. Jerry was an avid outdoorsman. He enjoyed hunting, fishing, camping and boating on the St. Lawrence River with family and friends. Jerry also had a keen sense of humor. He regaled family and friends with stories of his many experiences. Surviving are his loving wife of sixty-seven years, Patty; son David (Julia) of Alpine, TX; son Dennis (Tamara) of Heuvelton, NY; daughter Barbara (Kevin) Coats of Fernandina Beach, FL; daughter Kathyrn Castellow and companion Daniel, of Sapulpa, OK; son Steven (Ellen) of Charles Town, WV; daughter Elaine (Kevin) Impellizzieri of Sevierville, TN; ten grandchildren, thirteen great-grandchildren, and numerous nieces and nephews. He is also survived by a sister, Faye Pospeich, of Fairport, NY. He was predeceased by an infant son, John Joseph, in 1960, and sisters Joan and Dawn in 1943 and 2010 respectively. Jerry will be most loved and missed as a loving and devoted husband, father, and grandfather to his family. Memorial contributions can be made to your local volunteer fire and rescue units. Arrangements by Rose Mortuary Mann Heritage Chapel. Condolences may be shared with the family by visiting https://www.rosemortuary.com/m/obituaries/Gerald-Jerry-Durant/Memories The livestream will appear with the red LIVE NOW at https://www.youtube.com/user/shcathedral

Send flowers to the Durant family.