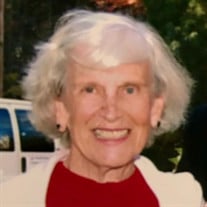 Knoxville - Gladys "Marie" Bingham departed this world for her eternal home in Heaven on January 15, 2021 at the age of 88. Marie leaves behind two daughters, Cecilia "Cele" Marie Bingham and Susan Bingham Letterman and her husband Mack F. Bingham. She was proceeded in death by her son, Barton Kendall Bingham in 1979 at the age of 20. Marie was born September 29, 1932 in Roanoke Rapids, North Carolina to the late Alma Rawls Draper and Henry C. Draper. Marie attended Roanoke Rapids High School where she excelled. After graduation Marie worked her way through college at the Bell Telephone Company first attending Mars Hill Junior College and then transferring to Carson Newman College where she graduated in May 1955 with a degree in Elementary Education. Marie was well known for her brains as well as her beauty in college. While attending Carson Newman, Marie met her future husband Mack at the daily mandatory Chapel service. She also was awarded many distinctions; her favorite being crowned May Queen in her senior year. Marie was a member of Central Baptist Church Bearden where she taught Sunday School and Preschool throughout the 1970- 80s. Over the years Marie was beloved by many students as she taught public school in Louisville, KY, the private Hebrew Academy in Memphis, TN and private schools in Knoxville, TN. After 17 years of casting her magic over the children at West Hills Baptist Kindergarten and Preschool, Marie retired in May 1995. Marie's girls celebrated her retirement with her on a beach vacation to Nags Head, NC which was her most treasured haven from childhood until her death. Marie loved to travel and visited many places in the world, most often with her youngest daughter Cele as her traveling companion. Together, they traveled to San Francisco, New York, Hawaii, mainland Japan, Okinawa and several cruises throughout the Caribbean. Additionally, during retirement Marie was trained and volunteered as a Senior Companion and was recognized in May 2006 by Knox County Advisory Board for her exemplary performance in providing care, assistance and humanitarian acts of kindness to the citizens of Knox County. Passionate for books and a voracious reader of everything from poetry to politics to psychology, she favored medical journals and encyclopedias. Her daughters often said that Mom should have been a physician. She was also a great poetry reciter and storyteller again with diversity from "The Road Less Taken" by Robert Frost to "Jack and the Beanstalk". Other than her children, Marie's loves were her dogs, birds, butterflies, sunrises, sunsets and the beach. She said she always felt closest to God through animals and nature. There will be a private graveside service on Saturday, 6 February at Edgewood Cemetery, Knoxville Tennessee. Online tributes, memories and condolences may be left for the family at www.rosemortuary.com. Family requests no flowers. In lieu of flowers, donations may be made to the Barton Kendall Bingham Scholarship Fund at Carson Newman College, POC: Susie Trentham at 865-4713500 or the Marie Bingham Covid-19 Relief for Animals memorial fund at www.young-williams.org; or Young-Williams POC: Grace Bennett at 865-215-6664.

The family of Gladys “Marie” Bingham created this Life Tributes page to make it easy to share your memories.

Knoxville - Gladys &quot;Marie&quot; Bingham departed this world for her...