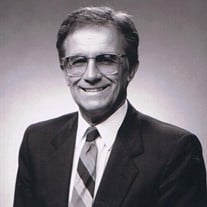 H.C. (Chet) Borge Born in his home in Arlington, NJ September 13, 1927 and died February 22, 2021 and went to be with his Lord & Savior. Preceded in death by his father Monrad Bjarne Borge and mother Johanna Sofia Garnes Borge who migrated from Norway through Ellis Island and also his wife Kathryn Foutch Borge and brother Richard (Geri) Borge of Nutley, NJ. Survived by son Richard (Cindy) of Plano, TX; son David of Apopka, FL and daughter Lisa (Steve) Hammond of Douglasville, GA. Also survived by 8 grandchildren Carrie, Richard, Jr., Janna and Kimberly of Texas; Kevin, Christopher and Dustin of Florida and Daniel Knott of Knoxville, TN. Also 6 great grandchildren Matthew, Luke, Jacob, Hannah, and Brayden of TX and Everly of FL. Also leaves brother Dr. Norman (Dona) of Ft. Worth, TX and brother-in-law Bill Wall, Jr (Jeanette) of Folley, AL and many nieces, nephews and their families and also several relatives in Norway. Served in the U.S. Army at the end of WW II and was last stationed in the Philippines. Graduated from Kearny High School in Kearny, NJ; Fairleigh Dickinson College in Rutherford, NJ and the University of Tennessee. At UT he was a cheerleader in 1950. He started his career as an engineer with Union Carbide & Carbon Chemicals in January 1952. He learned to play the trombone at the Salvation Army in Newark, NJ. He was an original member of the PAR-40’s Jazz Band in Knoxville as well as a former member of the Knoxville Community Band, K-Jazz Band, Al Curtis Band, Cavaliers Jazz Band, East Tennessee Concert Band, Central Baptist Bearden Orchestra and First Baptist Concord orchestra. Enjoyed playing tennis with friends and family at the Knoxville Racquet Club and was club President in the mid 80’s. He was a USTA certified umpire and umpired SEC & professional matches throughout the south and east. In his mid-life, he became interested in the architecture and history of county court houses. And in his travels he photographed all county courthouses in 13 states of the more than 3100 county court houses; he has photographed 1250 personally. This is the largest collection of its kind in the country. He also was a volunteer with IRS Vita (tax assistance) program and volunteered at the Tennova and Park West Hospitals. Chet was a member of First Baptist Church of Concord and was an inactive deacon. The family will receive friends from 11:00 am to 12:00 pm Friday at the Rose Mortuary Mann Heritage Chapel followed by a 12:00 pm Celebration of Life service with Rev. Larry Boyles officiating. Interment will follow at Highland Memorial Cemetery with Full Military Honors. The family requests that memorials be made to Mission of Hope P.O. Box 01824 Knoxville, TN 37950. Online condolences may be made at www.rosemortuary.com. Arrangements by Rose Mortuary Mann Heritage Chapel. The services will be streamed live at https://www.facebook.com/RoseMannHeritage

H.C. (Chet) Borge Born in his home in Arlington, NJ September 13, 1927 and died February 22, 2021 and went to be with his Lord & Savior. Preceded in death by his father Monrad Bjarne Borge and mother Johanna Sofia Garnes Borge who migrated... View Obituary & Service Information

Send flowers to the Borge family.