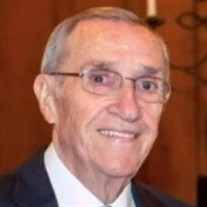 Harold Lee Shipley, 89, passed away Monday, December 20, 2021 to join his Heavenly Father. A native of Kingsport, Tennessee, he attended Dobyns-Bennett High School and graduated from Blountville High School. He attended East Tennessee State University and later in life went on to graduate from Kennedy University with a B.S. in Administration. He was employed by the Kingsport Tennessee Highway Patrol Department and later transferred to the Knoxville Patrol Office in 1959, which he loved! A very proud and patriotic person he was, serving two tours of duty as a Military Police Officer, once in the Air Force and again in the Army. He served both in the Korean Conflict and the Berlin Crisis. From 1960 to 1972 he was with Shelby Mutual Insurance Company, where he held the position of Claims Manager. While at Shelby Mutual, he became the local, State and National President of Claims. From 1972 to 1981 he was the owner of an independent insurance agency, Insurance Service and Associates. In 1981 he was appointed to a four year term as Knoxville’s Director of Public Safety, a position in which he supervised both the Police and Fire Departments during the World’s Fair. He was very involved in his community and served on several board of directors, such as the YMCA, where he was named, “Man of the Year.” He also served many years on the Board of Directors for Beta Homes. Harold was a member of Central Baptist Church of Bearden for 62 years, where he actively served as a Deacon and Director of a Sunday School Department to a special group of young married couples whom have always remained close to his heart. His love was working with the youth and driving the church bus to take them on their mission, choir, and senior trips! A great group of youth they were! His love for traveling led him to start a tour company, Choice Tours, traveling the country seeing God’s beautiful world! He later went back into law enforcement and was employed by the Knox County Sheriff’s Office as a Court Officer for the Grand Jury until he retired at age 81. He is survived by his wife of 66 years, Lois Blakley of Kingsport. His 3 children; Kathy McGill (Tim), Amy Shipley, and Jim Shipley (Tenae). 6 Grandchildren: Joe McGill (Whitney), Stephanie Markowitz (Brent), Elisabeth Maxwell (Davis), Jon McGill (Adrian), Faith Shipley, Grace Shipley and soon-to-be eight great grandchildren. He is also survived by his nephew, Alan Shipley (Vondle) and family and his sister-in-law, Jackie Shipley. He is preceded in death by his parents Nathan and Audra Shipley; Brother, Clifton Shipley; Sister and brother-in-law, Lawanda & Leon Wiles; and nephew, Brian Wiles. He will be buried on Tuesday, January 4, 2022 at 2:00 p.m. at the East Tennessee Veterans Cemetery on John Sevier Highway for a Family graveside service, which will be officiated by his longtime friend, Dr. Harold Bryson. Due to the Holidays and the Covid Virus, there will be no receiving of friends. Everyone, please remember him as you knew him. Thank you for your love and prayers during his sickness and his passing.

The family of Harold Lee Shipley created this Life Tributes page to make it easy to share your memories.

Send flowers to the Shipley family.