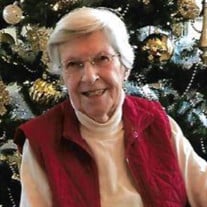 Harriet Hillery Stansfield, age 93, recently of Hot Springs Village AR passed away peacefully in the early hours of April 11, 2021. Harriet was born and raised in Manchester CT where she graduated from Manchester High School in 1945 and Saint Francis Hospital School of Nursing in Hartford, CT in 1948 as a Registered Nurse. She was preceded in death by her husband of 68 years, Robert (Bob) G. Stansfield. She leaves behind seven children: Jane Nitchals (Bob) Hot Springs Village, AR; Patrica Stansfield, Austin, TX, David Stansfield, (Elaine) Olathe, KS, Barbara Stansfield, Austin, TX, William Stansfield (Patricia), San Fernandina Beach, FL, Robert Stansfield (Patricia), Covington, GA, and Edward Stansfield, Playa del Rey, CA. In spite of growing up in the great depression she had a happy childhood with her siblings Frank and Grace. She wrote a family history in 2014 that contained many happy childhood memories of her parents and family. After graduation from nursing school, Harriet worked at Manchester Hospital as a surgical nurse. She married in Feb. 1951 and left her nursing job when she and Bob began their family. She kept her nursing skills honed by treating her children’s childhood illnesses like chicken pox, measles and mumps before vaccines were available for these. Childhood asthma, broken bones and surgeries were added bonuses. Bob’s job as a geologist had the family move to New York, Tennessee, Kansas, Georgia, Nebraska, and upon Bob’s retirement back to Tennessee. Harriet met each move with excitement and adventure which she instilled in her children. Throughout her life she was an active volunteer. In Tennessee she served as PTA president at Claxton Elementary School. She volunteered as a nurse for the American Red Cross in Kansas, served on the Board of Directors at the local chapter, taught First Aid, Home Health Care, and Mother and Baby Care classes there. She had an exceptional memory and was an avid reader. She continually amazed her children with her ability to remember history, biographical information, the latest medical advances, politics, and the familial relationships of everyone she knew or had known. She was a member of Newcomers Club of Knoxville and its book club for over 20 years. She learned to play golf when she was 70 and also kept active doing water aerobics into her 90s. Harriet made friends wherever she was. She set a great example of a life well lived to those she left behind. In addition to her children, she left nine grandchildren: Marie Stansfield, Matthew Stansfield, Amy Williams, Patrick Nitchals, Emily Rapier, Zoe Kaiser, Amanda Stansfied, Johanna Reynolds, and Mack Henningsen, great grandchildren Violet Kraft and newcomer, Georgia Harriet Reynolds. A funeral mass is to be held on April 20, 2020 at 10:30 at All Saints Catholic Church, 620 N. Cedar Bluff Rd., Knoxville, Visitation at the church with the family is at 10:00. Interment is at 12:30, April 20 at East Tennessee State Veterans Cemetery, 2200 E. Governor John Sevier Hwy., Knoxville, TN. 37920. Donations in lieu of flowers may be made to Boys Town, 14100 Crawford St., Boys Town, NE. 68010 (boystown.org) or to the American Red Cross of East Tennessee. More about the service is on the Rose Funeral and Cremation - Mann website and All Saints Live is streaming the funeral mass at boxcast.tv/view/harriet-ann-stansfield-funeral-mass-jc9eulsclmxl6fy8cpni. On-line condolences may be extended at www.rosefuneraltn.com. Arrangements by Rose Funeral and Cremation – Mann.

Harriet Hillery Stansfield, age 93, recently of Hot Springs Village AR passed away peacefully in the early hours of April 11, 2021. Harriet was born and raised in Manchester CT where she graduated from Manchester High School in 1945 and Saint... View Obituary & Service Information

Send flowers to the Stansfield family.