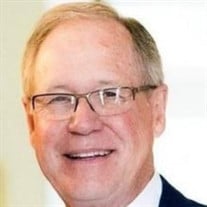 Dr. Henry Grady Arnold, Jr., of Knoxville, passed away at sunrise on Good Friday, April 2, 2021, following a courageous battle with cancer. Grady was at home with his family beside him as he entered into the presence of his Savior and Lord, Jesus. We thank God for Grady’s full and special life and we know that he is in God’s presence, not because of anything he has done but because of what God has done for him through Christ. Grady lived his life of faith in words and actions based on this assurance and desired for everyone who knew him to have a saving faith in Jesus Christ. Grady was born on February 27, 1944, in Jackson, TN where he grew up and graduated from Jackson High School. He attended the University of Tennessee, Knoxville, and was a member of the Phi Gamma Delta fraternity. It was during his time in college that he met his future wife and life-long partner, Patti. In 1968, Grady graduated from the University of Tennessee College of Medicine in Memphis and went to serve in the United States Air Force as a flight surgeon in southeast Asia. Following his military service, Grady returned to Memphis to complete his medical residency training in otolaryngology – head and neck surgery. Following residency, Grady and Patti moved back to make Knoxville their home, and Grady established an ENT medical practice where he served patients in the community for 40 years. While on staff at Park West Hospital, he served as Chief of Surgery, Chief of Staff, and on the Board of Directors. Following his retirement from full-time medical practice, Grady and Patti served with Knox Area Rescue Ministries and were founding members of Resurrection Church Knoxville. Grady and Patti also have fond memories of the special trips they took with each of their five grandchildren – each grandchild still talks about their trip with Papa and GrandPatti to this day. Everyone who knew Grady would agree that he had an unmatched energy level and drive that he applied to all of his work and activities, including his Christian service. For example, Grady felt called to start a Bible Study Fellowship class for men in Knoxville in 1989 and served as the Teaching Leader for the class for 10 years followed by 10 years as the Area Advisor for all men’s BSF classes in Tennessee and Alabama. Today, the Knoxville area has two men’s classes and several satellite groups through which over 600 men and 100 students come together each week to study God’s Word and to know Jesus Christ. Grady also traveled to Kenya on ten occasions to teach and perform cleft palate surgeries for children at Kijabe Hospital and taking the opportunity to share the Gospel while doing so. Grady’s skills as a surgeon and Bible teacher have made a lasting impact on so many lives in the Knoxville community, but it was his genuine and down-to-earth personality and conversations that connected him with the people he met. Grady’s favorite hobbies were golf, tennis, skiing, biking, hiking, and reading. Friends and family were always welcome to join him in these activities if they could keep up. While Grady and Patti enjoyed the opportunity to travel to many places, their special place was Kiawah Island in South Carolina where there will remain so many memories of time together with each other and with friends and family. We will miss our Papa, but we have peace in his passing and rejoice in the certainty of God’s promise of eternal life through Jesus Christ, which Grady has now received and will hear upon entering “Well done, good and faithful servant! You have been faithful with a few things; I will put you in charge of many things. Come and share your master’s happiness!” –from the parable of the servants and talents told by Jesus in Matthew 25 to describe the kingdom of heaven Grady is survived by his faithful wife of 53 years, Patricia Wasmansdorff Arnold (Patti); daughter, Amy Arnold Carter (Colby); son, Stephen Grady Arnold (Helen); grandchildren, Grady, Alice and Pryor Arnold, and William and Christopher Carter; sister, Kathy Arnold Jones (Bev, Jr.); and nephews, B. Jones III (Brooke) and Andy Jones (Jenny). Grady was preceded in death by his parents, Henry Grady Arnold, Sr. and Mary Kathleen Tooms Arnold; and grandparents, Guy Blackman and Lena Jackson Tooms and Robert and Belva Arnold. A private service for the family will be held at Resurrection Church Knoxville at 11 a.m. on Tuesday, April 6, 2021, and may be viewed by friends via livestream or online video at https://youtu.be/wicebrDbfcE. A private burial with military honors by the United States Air Force will follow at Highland Memorial Cemetery. In lieu of flowers, donations may be made in Grady’s memory to Resurrection Church Knoxville at www.resurrectionknoxville.com/donate, Bible Study Fellowship at www.bsfinternational.org/support, or Knox Area Rescue Ministries at karm.org/donate. Arrangements by Rose Funeral and Cremation - Mann. Online condolences may be made at www.rosefuneraltn.com.

Dr. Henry Grady Arnold, Jr., of Knoxville, passed away at sunrise on Good Friday, April 2, 2021, following a courageous battle with cancer. Grady was at home with his family beside him as he entered into the presence of his Savior and Lord,... View Obituary & Service Information

Send flowers to the Arnold family.