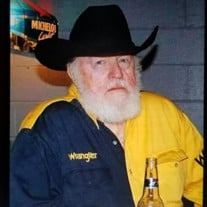 Homer Ray Hasty born October 6, 1940 passed away on Monday, September 20, 2021 from the spectacular beaches of Santa Cruz, California. He attended Tyson Junior High. Later to become a West High Rebel. One year behind the famous Everly Brothers. This former Hollywood Marine was well known for his distinguished laughter. You could hear his voice a mile away. May daddy never met a stranger. When you became friends with him that meant a lifetime. He was the King of the Starlite Bar & Grill (Saddle Rac) for over 40 years. Even had his own table and sign, Hasty Rum Road. Asheville Hwy was his stepping ground. Let’s not forget the Village Barn. He was the life of the party. The Lord decided it was time for this 80 year old young man to pack a bag and come home. He was preceded in death by his parents, Homer Hasty, Harold and Loena Williams, sister, Diana Buckner, brother, Stanly Hasty, step-sons, Jimmy and Jay Gibby. His memory will be cherished and kept alive by his family and friends, sons, Ray Hasty (wife Sharron), Carlo Spurgeon and Sean O’Shields; daughters, Davetta Shane Hasty, April Ray; and step-daughter, Pamela Gibby, and Resa; nieces, Leah Corum (husband Greg), Shawna Crossetti and LeAnn Cruz; nephew Stan Hasty; grandchildren, Matthew McAmis, Andrew McAmis, the Gibby’s, the Gray’s and the Lawson’s. Good friend and ex-wife, Betty Hasty she is the one he called for the answer to everything. We love you Daddy thanks for being a cool Papaw, keep Rockin in the Heavens above. The family will receive friends from 6-8:00 pm Monday, September 27, 2021 at Rose Funeral & Cremation-Broadway. A Celebration of Life Service will follow at 8:00 pm. Interment will be announced at a later date. Online condolences may be extended at www.rosefuneraltn.com

The family of Homer Ray Hasty created this Life Tributes page to make it easy to share your memories.

Send flowers to the Hasty family.