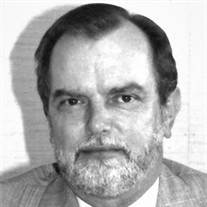 Jack Benny Wood of Oak Ridge, TN passed away on May 19, 2021 at the age of 79. He leaves behind a legacy of hard work, dedication, and determination that resulted in lasting memories his family and friends won’t soon forget. He is survived by sons Ron (Janet) Wood of Atlanta, GA, Dave Wood of Slidell, LA, Rob (Tricia) Wood of Denham Springs, LA, Scott and Chad Wood of Knoxville, TN and their mother, Fran, stepdaughter April Wood (Ric) Henderson of Dauphin Island, AL, and grandchildren Dave Wood of Orlando, FL, and Sean and Kaylie Wood of Denham Springs. His parents Ernest and Henrietta Scott Wood of Pascagoula, MS, who owned and operated Woodie’s Drive-in there for many years, preceded him in death. A special legacy is that he was proud grandson to Fredrick N. Scott (d. 1934) of Escatawpa, MS, renowned local poet who possessed an affectionate moniker, the Mississippi Nightingale. Family claims have always affirmed that Scott was original author of the lyrics to “Sixteen Tons”, having given the poem away with a handshake to credit never granted. Jack served our country in the US Navy as a sonar technician from 1961-1965 aboard the destroyer class USS Mitscher (DL-2), where his fleet provided cover during the Cuban Missile Crisis in 1962. Subsequent to his military service, Jack found a passion for photography, working various positions thru the years for Olan Mills Studios, School Pictures traveling the state of Mississippi producing student photos that likely graced hundreds of yearbooks, and eventually owning his own portrait studio as part of a small strip mall he built on his parents’ property in Pascagoula. He also created lasting memories for dozens of couples as their wedding photographer. Ever the salesman, where he claimed to possess the ‘gift of gab’, he sold a variety of items thru the years ranging from coffee to class rings to 4-color separations for brochures and magazines to funeral pre-arrangements. His desire to provide for his family and maintain his independence led to multiple periods of working for himself, including as a landscaper, laborer, and owner/operator of a local public-access TV show, “The Dyersburg Special” in Dyersburg, TN. His career was bookended by a stint as a Greyhound bus driver until 2004. His formal working life had begun as a teenager serving as a school bus driver. His ability to face and overcome obstacles in life started early for Jack. During high school, his mother experienced a critical medical emergency that required him to take over the business operations of Woodie’s at 15. He hired extra help, paid the workers increased wages, and began opening early to embellish the business by selling breakfast and coffee to the shift workers at Ingalls Shipbuilding, as they were passing by ‘the shop’ on their way to work first shift. All of this caused him to miss an entire year of school, until his mother could resume the main ownership operations. Subsequently, he graduated from Moss Point High in 1960, where he counted among his friends former US Senator Trent Lott (R-MS). Jack was married four times. First to his high school sweetheart, Diane, mother of sons Ron, Dave, and Rob. He then married Ruth, April’s mom. His third marriage to Fran yielded sons Scott and Chad. He took Martha Babb-Bailey of Clinton, TN as his fourth wife in 2001. Jack suffered a debilitating stroke in August of 2012. Since recovery of the immediate medical emergency, he has resided at NHC Oak Ridge, where he received rehabilitation and comforting care. He formed many friendships there with both residents and care workers, who will all certainly miss his infectious personality and humor. The family will honor his wishes by not having a traditional burial service. Cremation was handled by Rose Funeral and Cremation – Mann of Knoxville. Jack will eventually find a quiet resting space next to his mom and dad at their burial location in Escatawpa. In lieu of flowers or other tributes, donations to NHC Oak Ridge in his name would be most appreciated by the family. Online condolences may be made at www.rosefuneraltn.com. A small selection from Scott’s poem, “The Light in Mother’s Window” embodies Jack’s legacy to honor both his mother and her father, the poet. There is one fond recollection That has always touched my heart It always made me happy For it made me do my part It made no difference where I went No matter where I’d roam There was always a light in Mother’s room To guide my footsteps home

Jack Benny Wood of Oak Ridge, TN passed away on May 19, 2021 at the age of 79. He leaves behind a legacy of hard work, dedication, and determination that resulted in lasting memories his family and friends won&#8217;t soon forget. He is survived... View Obituary & Service Information

Send flowers to the Wood family.