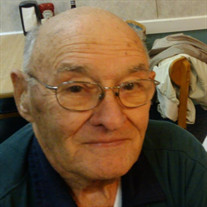 Jackson Edward Johnson, age 92, of Knoxville, passed away on Friday, March 4, 2022. He was born in Winston-Salem, NC, on January 8, 1930, but moved to Tennessee shortly after, where he spent the remainder of his life. He was preceded in death by his parents Lester Gilbert (Spider) Johnson and Agnes Sullivan Johnson, his step-mother Beulah Sullivan Johnson, daughter Jackie Marie Johnson Miller, sons Glenn Edward (Ed) Johnson, and Michael Ray (Mike) Johnson. He is survived by his wife of 69 years Mabel Ruth Laycock Johnson, daughter Martha Johnson Tallent of Knoxville, brother Don (June) Johnson of Jacksonville, FL, grandchildren Richard AKA Steve (Delanea) Tallent of Beaumont, TX, Sarah Tallent (Paul) Cabezas of Knoxville, Joshua (Sarah) Tallent of Everett, WA, Tracy Miller and Renee Miller both of Knoxville, 17 great-grandchildren, and several nieces and nephews. He graduated from Stair Technical High School in 1948, and joined the National Guard B Battery, 191st Field Artillery, attached to the 278th Infantry Division. He went to two summer camps in Ft. Jackson, SC, before being inducted into the Army when the Korean Police Action began in 1950. After he was discharged from the Army, he worked on many jobs as a carpenter before he began working for Rentenbach Engineering Company as a carpenter foreman, then assistant superintendent, and finally superintendent. The job he was most proud of was the restoration of Knoxville’s Old City Hall in 1982. He was a 50+ year member of both Cherokee Lodge #728 F&AM and Bearden Order of the Eastern Star #437, 50 year member of both Knoxville Council #75 Cryptic Masons and Paxton/Pearl Chapter #28 Royal Arch Masons. He was a member of Kerbela Shriners where he took an active part in the Legion of Honor. Following his retirement, he loved to travel in his motor home, and spent the past 26 winters south of Tampa, FL, at the Masonic RV Park & Youth Camp. He was a member of National Camping Travelers (NCT), a national camping club for Masonic families, where he was National Photographer for 13 years. There will not be a funeral, but a “Celebration of Life” is being planned for sometime this summer for both Jack and his son Ed, who passed away just 6 weeks prior to his dad’s death. Arrangements by Rose Funeral and Cremation - Mann. Online condolences may be made at rosefuneraltn.com.

Jackson Edward Johnson, age 92, of Knoxville, passed away on Friday, March 4, 2022. He was born in Winston-Salem, NC, on January 8, 1930, but moved to Tennessee shortly after, where he spent the remainder of his life. He was preceded in death... View Obituary & Service Information

Jackson Edward Johnson, age 92, of Knoxville, passed away on...