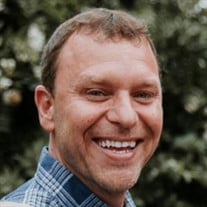 James “Al” Alan Foster of Knoxville, TN passed away peacefully in his sleep on Monday, May 2, 2022, aged 50. He will be proudly remembered as a loving husband, father, son, brother, and friend. Al was a joyful man who was always quick with a joke and was rarely seen without his trademark grin, which could light up a room of friends or strangers alike. Born in Asheboro, North Carolina on September 3, 1971, to the late James “Jim” Paisley Foster and Ronda Upton Foster, Al grew up to be a true Southern sports fan. He cheered for his alma maters, Walter Pines Page High School and Appalachian State University. His closet was full of t-shirts for the Atlanta Braves, UNC-Chapel Hill, and of course, the University of Tennessee Vols. Al shared his love of sports with his son Jackson (14). When he wasn’t playing tennis or basketball himself, Al joined Jackson on the field and in the stands. He met his wife, best friend, and frequent dance partner Sara Maull Foster at the New Orleans airport, and they were married on September 10, 2005 at the Biltmore Estate. They were blessed with their son, Jackson Doyle Foster, on January 10, 2008. The family frequently enjoyed sitting on the docks of Deltaville, Virginia, traveling to national parks, and walking in Lakeshore Park. Al worked in finance, banking, and corporate lending. He is missed by colleagues at First Tennessee Bank, Lighthouse Financial Group, and most recently, Rosenthal & Rosenthal. Al Foster is survived and will be forever missed by his wife Sara, his son Jackson, his mother Ronda Upton Foster, his brother Dave Foster (Sylwia), and of course, his dog Boulder and cat Mocha. Al had a large family and many friends who loved him, including his aunt Carol Sams (Jim), uncle Steve Shaw, father-in-law Kimball Maull (Vickie), sister-in-law Lisa Reath (David), brother-in-law Doyle Maull (Amy), as well as many cousins, nieces and nephews, and dear friends. You are invited to celebrate Al’s life at the Funeral on Sunday, May 8, at 2:00 PM, held at Lakeshore’s Park’s Marble Hall. The family will receive friends immediately after the service. Lakeshore Park’s Marble Hall, 6410 S. Northshore Drive, Knoxville, TN 37919. The service will be semi-outdoors and warm, so dress comfortably. Since Al hated formal wear, please leave your suits and ties at home. In lieu of flowers, please remember him by donating to his favorite park, Lakeshore Park Conservatory. Find more information at https://lakeshoreparkknoxville.org/support-the-park. Online guestbook, photos and condolences may be shared at rosefuneraltn.com. ________________________________________

James &#8220;Al&#8221; Alan Foster of Knoxville, TN passed away peacefully in his sleep on Monday, May 2, 2022, aged 50. He will be proudly remembered as a loving husband, father, son, brother, and friend. Al was a joyful man who was always... View Obituary & Service Information

Send flowers to the Foster family.