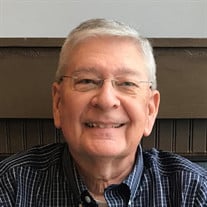 James R. “Jim” Carroll Jr, age 69 of Lenoir City, TN passed away on October 11, 2021. Jim was a longtime member of Church Street United Methodist Church where he attended the Parables class and held positions on multiple church committees. Also known affectionately as “Robby” to his classmates, he was graduate of West High School Class of 1970 and was an active participant in class reunion activities and planning. After graduating high school, Jim attended the University of Tennessee where he received Bachelor’s and Master’s degrees in the field of Audiology. Jim began his audiology practice in Knoxville after graduation and became the first hearing aid dispensing audiologist in the area at that time. He went on to hold the role of President of the American Doctors of Audiology, Audiological Resource Association, Tennessee Hearing Society, and Audiological Foundation of America (AFA) where he was also elected to the Board. On August 19, 2000, he graduated from the Arizona School of Health Services where he was in the first graduating class for the degree of Doctorate of Audiology (AuD). In addition to growing his practice, Jim had many community and civic passions. Early on, he represented District 3 Seat B in Knox County as a county commissioner. He served two consecutive terms in office from 1982 to 1990. Later, “Brother Jim” was a Master Mason of the Oriental Lodge #453 where he became a 32 degree Scottish Rite Mason with the Knoxville Scottish Rite Bodies. He was also a member of Kerbella Shriners, Order of Quetzalcoatl, and director of the Royal Order of Jesters. He was preceded in death by his father, James R. Carroll Sr. He is survived by his loving mother, Mary B. Carroll; his devoted wife, Mary R. Carroll; brother Richard (Audrey) E. Carroll; son James (Christina) Carroll, grandkids Gavin and Garrett Carroll, Clayton Purdun, and Kade Steenwyk; daughter Sherry (Samuel) Lamers, grandkids Abigail and Emma Lamers; and many other family, friends, and Brothers. Jim was loved by so many and will be greatly missed. Visitation will be held from 4:00 to 6:00 PM Monday, October 18, 2021 at Rose-Mann Funeral Home on 6200 Kingston Pike, Knoxville, TN 37919. Please consider wearing a mask for the safety of others. The graveside service will be held at Lynnhurst Cemetery on 2300 Adair Dr, Knoxville, TN 37918 on Tuesday October 19, 2021 beginning at 11am with a Masonic Service and followed by a service with Rev. Catherine Nance officiating. In lieu of flowers, Jim wanted donations to be made to support the Music Fund at Church Street United Methodist Church (www.chuchstreetumc.org) 900 Henley St Knoxville TN 37902. Arrangements by Rose Funeral and Cremation – Mann. Online condolences may be made at rosefuneraltn.com.

Send flowers to the Carroll family.