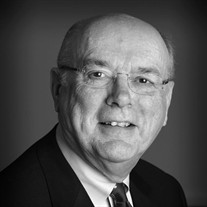 James Arthur Crook (1939 ~ 2022) Distinguished journalism educator and director emeritus, School of Journalism, University of Tennessee, died April 30, 2022, in Knoxville, TN. James Arthur Crook was born on May 2, 1939, in Floyd, Iowa, to the late Stanley George and Elta Mary (Norris) Crook. He graduated from Floyd High School in 1958 and earned his bachelor and master degrees at the School of Journalism at the University of Iowa in 1961 and 1963. Jim met his wife, Diane Adele (Jones), while they were teaching journalism, speech and drama at Marshalltown High School and Iowa Area 6 Community College. They were married on June 25th, 1966, in Mt. Pleasant, Iowa. That fall, they directed Guys and Dolls together in Ames, Iowa. He earned a Ph.D. in mass communication and education at Iowa State University in 1973, focusing on educational public relations and media literacy. Dr. Crook accepted appointment as associate professor in the University of Tennessee School of Journalism in 1974 and was promoted to director of the school in 1978 holding this position until his retirement in 2001. During this time, he also served as visiting professor at the S.I. Newhouse School of Public Communication at Syracuse University and at the Dutch School of Journalism in Utrecht. He joined six American and European journalism schools to create a transatlantic study of Journalism Without Stereotypes, funded by the U.S. Department of Education and the European Union. Dr. Crook was a member and journal editor of the Journalism & Mass Communication Educator for the Association for Education in Journalism and Mass Communication (AEJMC) for 13 years, president of the Society of Professional Journalists, East Tennessee chapter, and co-founder and director of the annual Front Page Follies. Awards for his professional journalism work included recognition from the National Scholastic Press Association, the Tennessee Press Association, three service awards from the AEJMC and was inducted to the University of Iowa Journalism Hall of Fame in 2014. Beyond journalism, Jim was an active member and lay leader at Church Street United Methodist Church where he served on several committees and sang in the choir. Jim had a love of music. He sang with the Knoxville Choral Society for 20 years and sang with the Choral Society in Bethlehem on Christmas Eve. He was a charter member of the University of Iowa Old Gold Singers, as well as a member of the Hawkeye marching band. He also participated in community theater in Ames and Marshalltown, Iowa, and in Oak Ridge and Knoxville, Tennessee. Some of his favorite roles were in Pirates of Penzance, 1776, The Fantasticks, Kiss Me Kate, Amahl and the Night Visitors, Shenandoah and Oliver. He is survived by his wife Diane and their three children: Arthur James (Rhonda) Hendersonville, TN, Elizabeth Adele (Tony) Sheets, Prairie Village, KS, and Thomas Judd (Melinda) Knoxville, TN, and 7 grandchildren: Cydney Crook Mason (Andrew), Kailyn Crook, Maisie, Ike, and Burt Sheets, Zackary and Anna Crook. A Celebration of Life will be held Saturday May 7th, 11: 00 am, at Church Street United Methodist Church, 900 Henley Street, Knoxville, TN. In lieu of flowers donations may be made to the Front Page Foundation, providing journalism scholarships, Po Box 52433, Knoxville, TN 37950. Jim was a wise and gentle man. We are kinder and smarter by having known him.

Send flowers to the Crook family.